Anthony "Tony" Redwood is a high ranking member of the AP (Advanced Police) force and one of the main antagonists of the Konami videogame Policenauts.

He first appears when he attacks Jonathan's ex-wife, Lorraine, with a car bomb, severely wounding and killing her in the process. Jonathan, unable to catch this culprit, decides to travels to Beyond Coast in order to uncover the mystery behind Hojo's disappearance. As Jonathan travels to Beyond, he meets Redwood on the plane, introducing themselves to each other. Redwood later meets Jonathan in the BCP (Beyond Coast Police Department) headquarters, where he tells Jonathan how to disable a bomb, by cutting the blue wire.

He also shows Jonathan a duplicate of the Narc drug capsule. Redwood later has a confrontation with Jonathan and Ed at the Astronaut Memorial Museum, first in a high speed car chase and later in a shootout at the train station, which ends with Redwood fatally shooting one of Jonathan's friends, Dave Forrest, who is also the boyfriend of Meryl Silverburgh.

He then hides a bomb in a store with multiple bags in order to keep the cops at bay. He later murders Hojo using Jonathan's gun in order to frame Jonathan for the murder. In a later confrontation at AMM, he kidnaps Marc in order to lure out Jonathan and his friends into a trap. Marc is rescued, but Ed is wounded by Redwood. As Chris is trying to shut down Ed's life support in the hospital, Jonathan exposes Chris and tries to reason with her, but before she could talk, she is suddenly gunned down by Redwood in his EMPS.

Jonathan later begins a one-man raid on Tokugawa's headquarters, killing most of the AP force in the process before engaging in a one-on-one gunfight with Redwood, ending with Jonathan emerging victorious in the 30th floor staircase. Mortally wounded, Redwood refuses to admit defeat and vows never to be taken out, and he jumps off the staircase and falls to his death, laughing insanely. 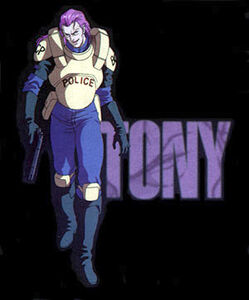 Add a photo to this gallery
Retrieved from "https://villains.fandom.com/wiki/Tony_Redwood?oldid=3708277"
Community content is available under CC-BY-SA unless otherwise noted.