The Imaginarium of Doctor Parnassus

Use Parnassus' traveling show to reap fame and fortune (succeeded).

He is a suave con artist who attempts to use a traveling show as a vehicle for fame and fortune.

The character was portrayed in his main form by the late Heath Ledger, who also played the Joker in The Dark Knight, made the previous year before his death in January 22, 2008, in which this made his final film appearance. In his transformation forms, he was Johnny Depp (who also played Gellert Grindelwald in Fantastic Beasts, Sweeney Todd in Sweeney Todd: The Demon Barber of Fleet Street, The Wolf in Into the Woods, Lanfranco Cassetti in Murder on the Orient Express, John Shooter in Secret Window and John Dillinger in Public Enemies), Jude Law (who also played Harlen Maguire in Road to Perdition, Pitch Black in Rise of the Guardians, King Vortigern in King Arthur: Legend of the Sword, and Yon-Rogg in Captain Marvel) and Colin Farrell (who also played Bullseye in Daredevil, Bobby Pellitt in Horrible Bosses, Jerry Dandridge in the Fright Night remake, Carl Hauser in the Total Recall remake, Percival Graves in Fantastic Beasts and Where to Find Them and Oswald Cobblepot in The Batman).

Tony Shepard first appeared when Doctor Parnassus' theatre troupe finds him drowning in a river; they end up rescuing Tony by pulling him out of the river, shortly before Tony then spits up a golden pipe. Tony thereupon claims claims to have amnesia, and they take him in a carnival barker. He convinces the troupe to put on a more modern show, with him as its star.

Soon enough, Tony finds out about a bet that Doctor Parnassus has with a Satanic trickster called "Old Nick"; the bet's game is that the first one to claim five souls takes possession of Valentina. Tony offers to help in return for Parnassus teaching him his magical tricks. Parnassus refuses at first, but relents out of fear of losing his daughter.

During a show, he invites a wealthy old woman into the Imaginarium, where his face changes shape and he romances her, dancing with her and taking her on a gondola ride, and in the process wins her soul away fro Old Nick. The woman, smitten, gives him a large check. He does the same with three other wealthy older women, bringing in vast sums of money. He also romances Doctor Parnassus' daughter, Valentina, frustrating her fellow troupe member and true love Anton.

In the dream world, Tony (whose face has once again changed) is speaking before a posh fundraiser. Anton interrupts him and exposes his fraud, and the angry crowd chases Tony to a gallows. Smitten with Tony are angry at her father, Valentina gives her soul to Old Nick; he thus wins the bet. Disappointed with the easy victory, Old Nick offers to trade Valentina for Tony; Parnassus agrees. Parnassus confronts Tony at the gallows holding Tony's golden pipe and a fake one. He challenges Tony to pick the real pipe for his life. Tony picks one and Parnassus swallows it and then hangs himself, Tony then makes Parnassus spit it out believing it is the real one, he then swallows it and lets the people hang him, however Parnassus wakes up and reveals to Shepard that the real pipe was inside his throat all along. Tony watches in horror as the people hang him and the fake pipe breaks inside his throat, letting the rope hang him and kill him for good. 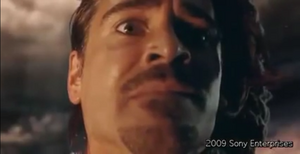 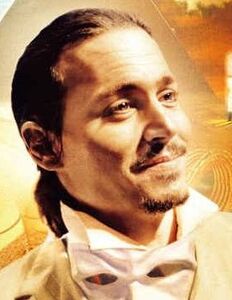 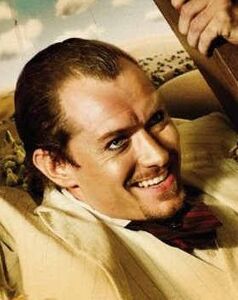 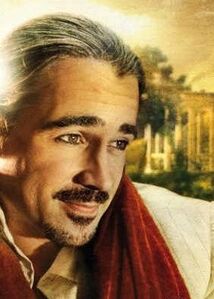