Villains Wiki
Register
Don't have an account?
Sign In
Advertisement
in: Mature, The Sopranos Villains, Male,
and 75 more

Boss of the DiMeo crime family

Anthony John "Tony" Soprano Sr. is the titular protagonist villain of the HBO drama series The Sopranos, and will appear as one of the central characters of the 2021 prequel film, The Many Saints of Newark. He is a New Jersey Mafia boss who is constantly struggling to manage both his crime family and his actual biological family. Due to all this stress he frequently undergoes psychological therapy (which actually does nothing to deter his criminal habits) and has many strange dreams.

He was portrayed by the late James Gandolfini, who also played Virgil in True Romance, Kenny Kane in The Mighty and Eddie Poole in 8mm, as Bobby Borriello, Mark Damiano II and Danny Petrillo played the character young. In the upcoming film, The Many Saints of Newark, he will be portrayed James' son Michael Gandolfini.

Tony was born on August 24, 1959, to Livia Soprano and Giovanni Soprano. He grew up living with his mother, father, and two sisters Janice and Barbara in the Ironbound in Newark, New Jersey. His father was always involved in crime and Tony recalls some of his activities in flashbacks on the show. Apart from his father's criminal activities, Tony and his family also grew up suffering abuse from their mother, a factor which makes itself apparent in Tony's temper, narcissistic attitude, as well as causing him to suffer from panic attacks.

Tony went to high school with Artie Bucco and Davey Scatino and remained friends with them into later life. He played baseball and football, and according to Sal Bonpensiero, he nearly made All-County. In high school he met his future bride, Carmela DeAngelis. Tony was also close to his cousin Tony Blundetto, and neighborhood kids used to call them Tony Uncle-Al and Tony Uncle-Johnny after their fathers to tell them apart. Blundetto eventually was arrested for his part in a hijacking when the two Tonys were young men. Tony was supposed to join Blundetto on the job but failed to because of a Panic Attack: at the time, he told people he'd been attacked by a couple of "mulinyans" (aka: black men) and injured.

Tony also attended Seton Hall University for a semester and a half before dropping out, to pursue a life of crime. Tony was part of an unofficial crew of young criminals consisting of Ralph Cifaretto, Silvio Dante, and Jackie Aprile Sr. Tony gained notoriety in the DiMeo crime family by robbing a high-stakes card game ran by Feech La Manna, along with Sil and Jackie. This, along with his first murder in 1982, of a small-time bookie put him on the fast track to being a made man.

By 1995, Tony was a well-respected Caporegime in the organization when the boss of the family, Ercoli "Eckley" DiMeo, was sent to prison. Tony's longtime friend and fellow captain Giacomo "Jackie" Aprile, Sr. took on the role of acting boss in December 1995. With DiMeo in prison, Aprile became the official "Street Boss" of the family. Under Jackie's rule, the DiMeo Family was peaceful and prosperous until 1998, when Jackie was diagnosed with intestinal cancer; afterward, the family slowly descended into turmoil. With Jackie in and out of the hospital, and as such not able to fully run the family, Tony began to take on many of his duties, much to his Uncle Junior's chagrin.

With Jackie succumbing to cancer in mid-1999, a crisis emerged as to who would run the family, and the soldiers and other captains began to prepare for all-out war within the family, but Tony brought a quick end to the conflict by making Junior the official boss of the family. Junior would unknowingly act as the lightning rod for the feds, while Tony would run the family from behind the scenes as a de facto boss starting in 2000. Tony becomes the official boss after Junior is retired by the family, following Junior's shooting of Tony. 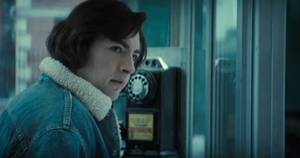 Michael Gandolfini as teenage Tony in the upcoming film, The Many Saints of Newark.