Transportation and combat ship working for the Lemons

Guard of the Lemons' oil rigs

Stop anyone from discovering the Lemons' secret oil reserves (both failed)

Tony Trihull is a supporting antagonist of Pixar's 12th full-length animated feature film Cars 2. He is a combat and a transportation ship working for Sir Miles Axlerod, Professor Zündapp, and the other Lemons.

He was voiced by Lloyd Sherr.

Tony's appearance is based on the real life U.S. A Navy combat ship called the USS Independence (LCS-2). His design also somewhat resembles a shark due to his grayish coloration, pointy nose, and sharp teeth. He is equipped with a giant magnet, a missile launcher, mini-gun turrets, and a torpedo launcher.

Tony is loyal to the Lemons and willing to aid them with their evil plan to discredit alternative fuels, as well as transport them when necessary. Like his employer Miles Axlerod and Professor Zündapp, he is shown to be willing to kill others (as shown when he threatened a crab boat to leave the site of the Lemons' oil rigs with his missile launcher), and in fact seems to take pleasure in doing so, as he is shown smiling when aiming his missile launcher at Finn McMissile.

Tony first appears in the film at the site of the Lemons' oil rigs, threatening the crab boat transporting British secret agent Finn McMissile to the Lemons' oil rigs with his missile launcher. His threat successfully chases the crab boat away, but unknown to him, Finn has used his grappling hooks to hang on to his side, and is lifted up to the oil rig along with him. After Finn is discovered by the Lemons and they chase him, he aids them by firing missiles at him when he escapes over the ocean. Finn dodges the missiles, but Tony then fires a torpedo at him instead, which seemingly hits and destroys him. However, Finn actually somehow managed to avoid being destroyed by the torpedo and faked his death by letting his tires float to the surface of the ocean.

Tony appears for the second time much later in the film when Professor Zündapp attempts to escape from Finn McMissile in London. When Finn catches the Professor with his grappling hooks, Tony helps out the Professor by using his magnet to pull him and Finn towards himself and attempting to destroy Finn with his missile launcher. However, Finn dodges the missiles and releases several mini-bombs out of his axels, which get stuck to Tony's magnet. Tony only has a moment to realize in horror what's about to happen before the mini-bombs explode in massive impact and destroy him as result.

Although Tony was destroyed in the film (which takes place before the video game), he appears in the game's intro in a simulation ran by the secret spy facility CHROME, in which he is seen riding around the oil rigs from the film. He also appears as a hazard in one of the simulated Oil Rig tracks, where running into a spotlight will cause him to yell out "You don't belong here!" and then fire a missile at the player character, destroying them.

Tony's first appearance in the film.

Finn hanging on to Tony.

Tony (along with another unnamed combat ship) being lifted up to one of the Lemons' oil rigs.

Tony pulling in Finn and Professor Zündapp in with his magnet.

Tony fires a missile at Finn, but he dodges it.

Tony's horrified realization that he's about to get blown up. 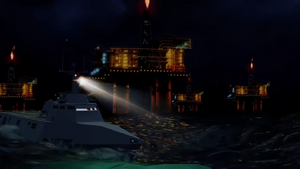 Tony in the intro cutscene of Cars 2: The Video Game. 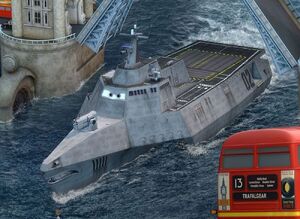