Capture Roger Rabbit and bring him to Judge Doom (failed).

The Toon Patrol are the secondary antagonistic faction of the 1988 Disney/Touchstone hybrid film Who Framed Roger Rabbit. They are a gang of five toon anthropomorphic weasels who serve as the henchmen to their boss Judge Doom.

They are based on the weasel thugs from Disney's Wind in the Willows (which is based on the 1908 children's novel of the same name by the late Kenneth Grahame); the first half of Disney's 11th full-length animated feature film The Adventures of Ichabod and Mr. Toad, except that those weasels were patterned on early 20th century British thugs, while the Toon Patrol are caricatures of 1940s American gangster movie types.

The Toon Patrol are the law enforcers of Toontown, although they behave more like vigilantes and mercenaries who abuse their power out of sheer sadisim just like their boss. Judge Doom has hired them to arrest Roger Rabbit for the murder of Marvin Acme, so that he can execute Roger Rabbit by dunking him in dip. Their vehicle is a "real" black 1937 Dodge Humpback panel truck which serves as a paddy wagon. The vehicle is fitted with official City of Los Angeles "Toon Patrol" decals on the front doors.

Like all of the other Toons in the film, The Toon Patrol are invincible to physical body harm except from a ghastly green chemical blend called "The Dip". A combination of powerful solvents, The Dip dissolves the ink and paint which comprise the toons.

In the case of the weasels, it is shown that prolonged laughter is also lethal to them (though instead of dissolving them completely, they instead become ghosts); while Eddie Valiant jokes around in front of them during the climax of the film, all of them, except for their leader Smartass the Weasel die from laughing at him; Smartass meets his demise after Valiant kicks him into a vat of The Dip. His boss himself would meet this fate shortly afterwards.

Members of the Toon Patrol 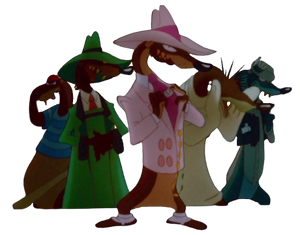 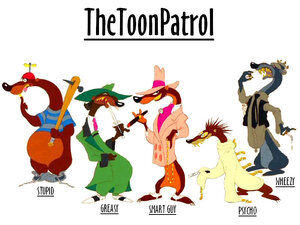 Retrieved from "https://villains.fandom.com/wiki/Toon_Patrol?oldid=4282217"
Community content is available under CC-BY-SA unless otherwise noted.