Toot Braunstein is one of the main characters in the adult-comedy series Drawn Together and she acted as one of the more openly antagonistic of the "main cast" until more recent additions to the lore - where she was replaced by Princess Clara as the resident "bitch" of the cast.

Toot is a parody of many 1920s cartoon characters and a washed-up former sex symbol, she is also extremely violent and prone to grotesque moments of comedic sociopathy. Though this trait is not unique to Toot and almost all characters in the show have displayed similar sociopathic behaviors at one point or anothr.

Toot is short-tempered, greedy and has a very borderline personality who copes with life through alcoholism, binge eating, and self-mutilation. Toot can be quite delusional as she lives in a fantasy world, insisting that she is still a beautiful sex symbol that all men want her. She is also extremely gluttonous as; Toot is known for eating indigestible objects such as a TV and a cell phone, particularly when frustrated (she eats the TV when she is unable to find the remote at one-time) and she even ate a wienermobile. Toot ate wall insulation that she thought was cotton candy, which made her mouth bleed. She frequently consumes enormous amounts of food in one sitting, and on some occasions she even resorts to cannibalism as Toot once ate Ling-Ling accidentally during an eating binge, and Wooldoor once after announcing she could not stop eating (eventually defecating him into a puddle on the floor after adding that she had irritable bowel syndrome). She is also quite fond of cheese, as she is often seen eating cheese-related products; as she carries a can of spray cheese around with her and she even wishes for a large amount of cheese in one episode.

In The Drawn Together: The Movie, Toot ditched the rest of her housemates and took off with the van. She went to Bedrock where Barney Rubble, husband of Betty Rubble, had an affair with and impregnated her. However, Foxxy Love found her and dragged her back to the gang to get their show back on the air. They failed and Toot, along with the other surviving housemates, was killed by an eraser bomb. 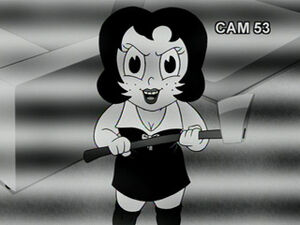 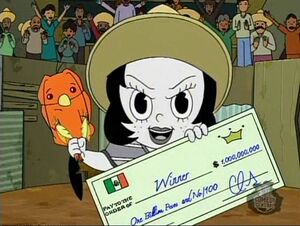 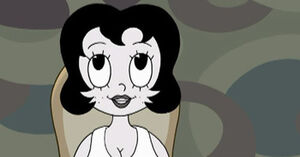 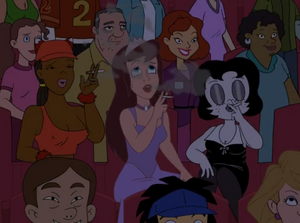 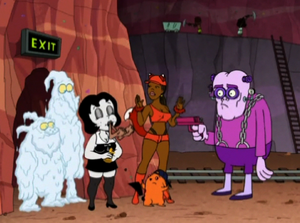 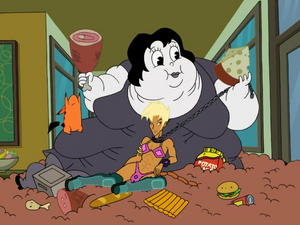 Toot after eating all the food supplies in the house. 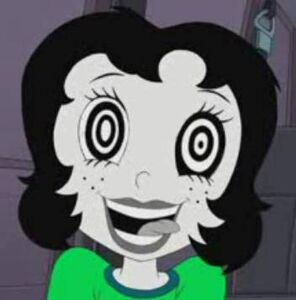 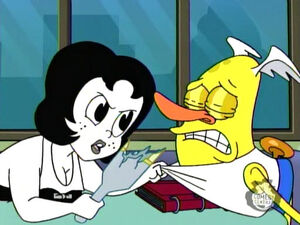 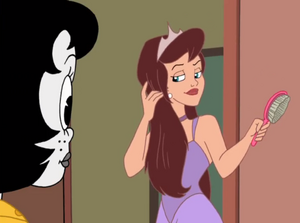 Add a photo to this gallery
Retrieved from "https://villains.fandom.com/wiki/Toot_Braunstein?oldid=2594410"
Community content is available under CC-BY-SA unless otherwise noted.