Thief
The Tooth Fairy is a recurring villain from Teen Titans Go!, who was made exclusively for the series. She is based on the famous legendary figure of the same name. The Tooth Fairy likes to take people's teeth after they fall out and eat them.

She was voiced by Khary Payton.

The Tooth Fairy made her first appearance in "Dignity of Teeth" when Raven took the Teeth Titans to her lair to show them where their teeth went after they lost them. The Tooth Fairy was there and she immediately struck Raven and the other Titans as being very creepy, disgusting, and offputting. Raven asked her if her friends could have their teeth back after they had all lost them but the Tooth Fairy refused, saying that all sales were final. She then revealed that upon obtaining said teeth, she eats them, which was the most disgusting thing about her, in Raven's opinion. The Tooth Fairy decided to play a fair game and challenge Raven to a tooth eating competition. Whoever ate the most teeth would win. During the competition, Raven realized that she actually enjoyed eating teeth and won the competition, much to the Tooth Fairy's shock and dismay. Being a woman of her word, however, the Tooth Fairy admitted defeat and gave the teeth back to the Teen Titans.

In "The Streak", the Teen Titans had a competition with Kid Flash over who would be the first to stop 52 villains. Unfortunately for Robin and Beast Boy, Cyborg, Starfire, and Raven left the team to join Kid Flash. With Kid Flash quickly catching up to what was left of the Teen Titans, Robin and Beast Boy needed to think fast and get new members. Beast Boy assembled a team of inadequate misfits to join the team. These would be the Tooth Fairy, Santa Claus, and Sticky Joe. Despite the Tooth Fairy formerly being a villain, she decided to help the Teen Titans, knowing she would get some teeth from the bad guys they defeat. During a battle with Dr. Light, the new Teen Titans proved to be a bunch of incompetent failures. The Tooth Fairy did nothing but collect the teeth of Dr. Light after he was knocked out by Kid Flash, who won the fight for real, tying the scores at "51". Finally, there was one last fight with Killer Moth that took place on a train. Whoever won that would win the whole competition. Before Kid Flash could even begin to fight, Robin used his staff to break both of his legs, while he and his new titans defeated Killer Moth. Starfire, Cyborg, and Raven refused to help Kid Flash as they were too lazy.

In "Easter Creeps", the Teen Titans' teeth fell out after eating too much Easter candy and the Tooth Fairy came and collected them all. She revealed that she had an evil plan, where she would give people delicious unhealthy candy on Easter so that she could steal their teeth when they fell out. She also planned on stealing this holiday away from the Easter Bunny so that she could make it into a day that was all about her doing evil and getting away with it, while other people celebrated. The Teen Titans trained the Easter Bunny to become a better fighter so he could reclaim his holiday back from the Tooth Fairy. They turned him into a giant muscular rabbit. When the Easter Bunny came face to face with the Tooth Fairy, instead of them fighting, they both fell in love with each other. They started kissing and making out and their love caused the Easter Bunny to lay eggs that were both delicious and healthy, saving Easter once and for all, even if it happened in a really disgusting way.

The Tooth Fairy is an ugly cyan fairy creature with messy black hair. Despite her somewhat masculine appearance and noticeably male voice actor, the Tooth Fairy is a female. She has pointed ears, crooked yellow teeth, a furrowed unibrow, and tiny little wings. She wears an orange collar and a pink jumpsuit with a picture of a tooth on it.

The Tooth Fairy is a crazy and messed-up freak show, who has an unhealthy obsession with eating teeth and she will eat the lost teeth of anyone in the world by any means, even if her methods of retrieving them are somewhat unethical. Despite her mainly being a villain, the Tooth Fairy has oftentimes turned to the good side and become friends with the Teen Titans, sometimes even helping them with fighting other forces of evil. 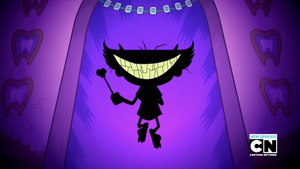 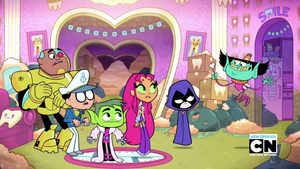 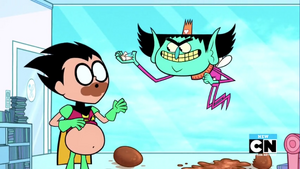 The Tooth Fairy taking Robin's teeth after they fall out. 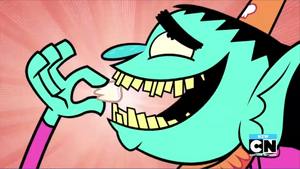 The Tooth Fairy eating a tooth. 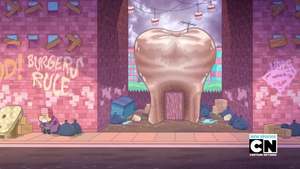 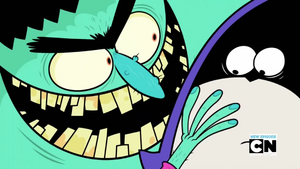 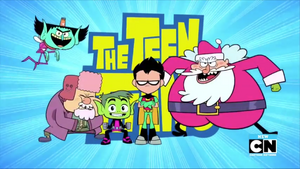 The Tooth Fairy joins the Teen Titans, along with Santa Claus and Sticky Joe. 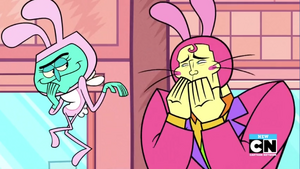 The Tooth Fairy and The Easter Bunny fall in love.