Taking quarters children leave for him.

Collect as many teeth as possible.

The Tooth Fairy is the main antagonist of the haunted maze attraction of the same name at Knotts Scary Farm, the annual Halloween overlay for Knotts Berry Farm amusement park. He is a supernatural entity that kidnaps, tortures, and murders people (especially children) with help from his minions.

He is a reimagining of the original version before 2017.

None is known about how the Tooth Fairy came to be or for how long he has been around. He is rumored to have existed since the beginning of time. He is obsessed with teeth and will kidnap any child that happens to see him while he is in their home.

In the attraction, the guests arrive in a suburban home where several people are crying and mourning. One of the children in the home has been abducted, with the child's blood found covering the walls and sheets of their bed. Guests follow the Tooth Fairy's disfigured minions into a doorway to his realm: a twisted, dark, endless dentist office crawling in minions and sadistic dentists.

Throughout the maze, the shelves are lined with the toys of the hundreds kidnapped children. Further along the way, sets of tools are seen, such as hooks, chainsaws, and scalpels. Guests come across many children, trapped in cages. some are hanging from chains and hooks, others are strewn-out corpses missing their bottom jaws (some are also missing guts). A minion shows off a massive drill before guests find millions of quarters that the Tooth Fairy has taken and stored. They then arrive at a torture chamber, where children are kept in suspended cages, and one lies dead on an operating table, mutilated with a dentist pulling his organs out. Skin is stretched out on the walls, and lower jaws are kept on mannequin heads.

Guests then arrive in a receptionist office, where bloody nurses chase them into a set of operating rooms, where dentists are drilling into the mouths of adult victims. After passing through another room with another mangled child corpse (this one missing everything below the top jaw), guests enter a warped black hallway covered in mouths and teeth. The mouth of a screaming man is displayed at the end of the hall. The guests then walk into another area filled with children's corpses, organs in jars, and pinned butterfly collections.

Finally, guests happen upon a maze of dead children tied to mattresses with barbed wire and impaled by stakes and posts. The Tooth Fairy himself lurks here, and will jump out and attack guests in an attempt to rip out their teeth.

Though he physically appears little in the actual attraction, the Tooth Fairy is responsible for kidnapping children and ordering his minions. He is a sadist, with teeth being his unquenchable obsession. He loves teeth and will do anything to get more. He thrives off pain and suffering, as he kidnaps and has him and his minions brutally torture innocent children, ripping out their teeth and then disemboweling, mutilating, and starving them until they die. 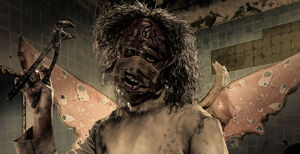 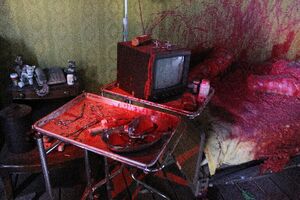 The aftermath of one of the Tooth Fairy's visits. 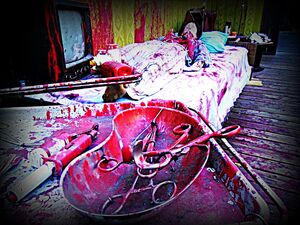 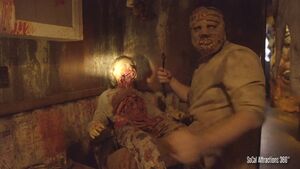 One of the Tooth Fairy's minions with a child victim. 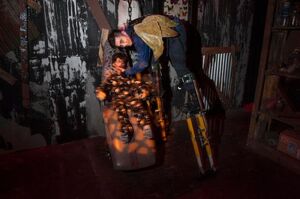 One of the Tooth Fairy's actors posing next to a dead child prop. 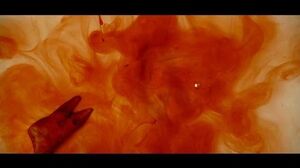 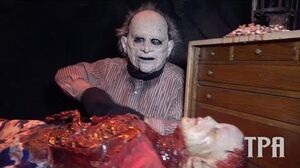