Top Man is one of the eight Robot Masters and a minor antagonist in Mega Man 3, as well as one of the four additional bosses in Mega Man II. While originally created as a helper robot to assist Dr. Light, he was stolen and reprogrammed into a violent Robot Master by Dr. Wily. Top Man has a head that slightly resembles a top, albeit with a humanoid face on the front. His armour is orange and his boots have wheels that allow him to skate around and spin.

While Dr. Light was attempting to fulfill his life-long dream of creating the ultimate peacekeeping robot, Gamma, Dr. Wily inquired on Dr. Light's plans and manipulated Dr. Light into allowing Dr. Wily to get involved. Dr. Light needed 8 energy elements to finish creating Gamma and so he created seven helper robots to collect the energy elements. Top Man was the one who was specifically designed for traveling to different planets to collect the energy elements. Dr. Wily betrayed Dr. Light, and stole his 7 robots to reprogram them into his Robot Masters. In addition to Shadow Man, who Dr. Wily had previously discovered on his own, Dr. Wily now had 8 Robot Masters and was able to finish creating Gamma.

Dr. Wily assigned Top Man to a base of his own. Meanwhile, Dr. Light sends Mega Man to go stop Dr. Wily from creating Gamma, as the power Dr. Wily would possess with Gamma would be inconceivable. Mega Man must defeat the Robot Masters to obtain their energy elements to keep Dr. Wily from being able to finish creating Gamma. Mega Man infiltrates Top Man's headquarters to defeat him. After Mega Man battles Top Man, Mega Man is victorious, thanks to Hard Man's Hard Knuckle, and learns Top Man's Top Spin technique. This proved essential to defeating Dr. Wily, as when Dr. Wily summons a partially finished Gamma, the player can use the Top Spin to defeat Gamma in three-four attacks. This is possibly due to the fact that Top Man was specifically designed for collecting the energy elements and would have more knowledge regarding them and ultimately becoming the bane of Gamma, the one who needed them.

Top Man returns in this title as an additional boss. His role and boss fight are practically identical to his ones from Mega Man 3. After Top Man's defeat in this game, he never reappears in any canonical Mega Man game as a boss, possibly being canonically defeated for good.

In Super Smash Bros. Ultimate, Top Man appears as a novice support spirit that makes the fighter start the battle with a Screw attack. His spirit battle is a stamina battle against four Mega Mans on the Ω form of the Distant Planet stage with increased power to their dash attacks. 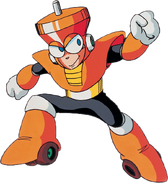