Collect All the Humans Listed by Steven Universe and Transport Them to the Human Zoo (formerly).

Topaz is a major antagonist in Steven Universe. She is a Homeworld Gem fusion who serves under Yellow Diamond.

She serves as the secondary antagonist of Season 4 and returns as an anti-villain in the first episode of the fifth season.

She is voiced by Martha Higareda.

At an unknown point (likely after the Crystal Gems defeated Holly Blue Agate and broke Greg Universe out of the Human Zoo) she and an Aquamarine were personally assigned by Blue and Yellow Diamond to find and retrieve several specific humans.

In "Doug Out", Topaz and Aquamarine are briefly seen at the end of the episode approaching Onion.

In "The Good Lars", Topaz and Aquamarine are yet again seen at the end of the episode, this time approaching Sadie.

In "Are You My Dad", after Steven realizes that Onion, Lars, Sadie, and Jamie have all gone missing. After splitting up, Steven and Connie manage to find Aquamarine in the woods. As soon as Connie states her name, Aquamarine happily flies around and tells Topaz that she "found a Connie", revealing that Topaz has trapped all of the missing people inside of her body. Topaz soon reveals that she is actually a Gen Fusion, unfusing and refusing herself over Connie in order to trap her, and when Steven tries to attack, Aquamarine takes out her Wand, forms a bubble around Steven and slams him into a tree, knocking him out. As she and Aquamarine walk off, Aquamarine casually states that their job is so easy, Topaz really could've done it all by herself. But she just remains silent.

The Gems then try to fight Topaz and Aquamarine, however, they find themselves unable to do so without endangering the lives of the humans, with Aquamarine using this to her advantage, stating that Blue Diamond never said to bring the Humans back alive, nearly having Topaz crush Jaime's skull. Steven then tells Aquamarine that he is "My Dad", Topaz then captures him in her body and walks back to the ship. Aquamarine then starts to pilot the ship and prepares to fly back to the Zoo, however, Steven manages to use his Bubble Shield to blow apart Topaz and free everyone. Topaz tries to fight them off, then grabs Sadie. Lars tries to help but is soon paralyzed with fear, leaving Sadie to rescue her self. Just as Alexandrite manages to catch the ship and everyone (sans Lars) tries to jump to safety, Aquamarine uses her wand to freeze everyone in place. Knowing the that he has no other option, Steven reveals himself as the Gem who started the rebellion and shattered Pink Diamond, Rose Quartz, causing Topaz and Aquamarine to abandon their original mission and capture Steven instead, flying off to the Gem Homeworld with him, while everybody in Beach City except for Sadie believed that Steven is presumed dead.

In "Stuck Together", While on Aquamarine's Ship, one Topaz holds Steven while the other finds Lars hiding on the ship's staircase. They are ordered by Aquamarine to fly the ship to Homeworld and fuse, so Steven and Lars are contained. At some point, the ship's engine fails, so Topaz goes to the ship's engine room to repair it. While repairing it, Topaz listens to Lars and Steven's conversation and is touched by how, even though they are in big trouble, they find comfort in each other. Topaz begins to cry, explaining how she has to pretend to be okay with her job, but hates it, as someone always comes between her component Topazes.

Topaz then decides to help Lars and Steven get off the ship. She activates the escape pod but is stopped by Aquamarine. Topaz, with the support of Steven, tries to explain what they were doing, but Aquamarine destroys the escape pod. Being threatened, Topaz grabs one of the Gem Destabilizer weapons and pins Aquamarine to a wall. Aquamarine explains how Topaz will be separated and shattered for what she is doing, bringing Topaz back to her senses. She releases Aquamarine, and they all agree to never talk about this event again. Once they reach Homeworld, Topaz unfuses and her components take Steven and Lars to different places.

In "Familiar", Topaz made a small cameo as one of the guards in Homeworld. 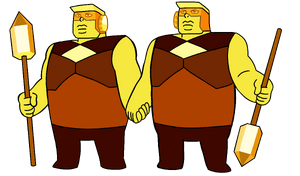 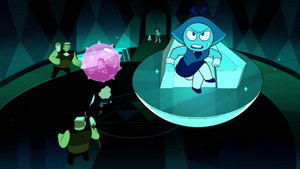 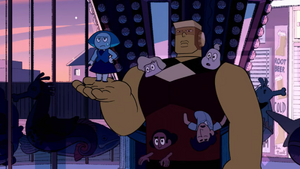 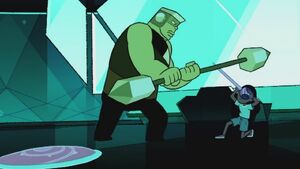 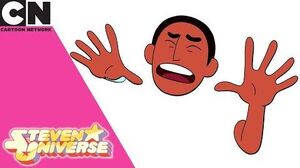 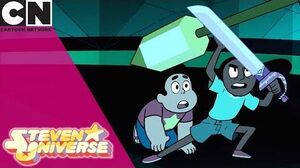