The Planetary Man
Karanada
The Emptiness that Devours

Devour all things in existence.

Cataclysmic Deity
The Topographical Man is a villain from Marvel Comics who faced the original Guardians of the Galaxy, who existed in an alternate future and had only loose connections to the more infamous Guardians founded by Star-Lord (though the two have met and even allied on occasion).

The Topographical Man is an unnamed giant that drifts across space, devouring anything he comes across and is seen as the exact opposite of life, greatly feared for his power he is akin to an angry, hateful god but was ultimately defeated by the Guardians of the Galaxy, who used a sacred ritual to ascend Nikki to near-godlike status, allowing her to awaken the Topographical Man and make the monster feel love, due to the apparently malevolent nature of the Topographical Man the mere act of feeling love caused the giant to disperse and saved the galaxy from becoming his next "meal".

The Topographical Man resembled a gigantic humanoid male, so vast that he held two stars in either fist, it was stated that each star was lightyears across from one another, making him unspeakably massive, it is worth noting that in actuality the stars appear far, far closer than lightyears it is likely the only way the artists could depict anotherwise impossibly large character, his entire body is made out of oceans, mountains and continents.

The Topographical Man is immeasurably old, immensely powerful and a silent antithesis of life itself, he exists to destroy and consume, he is not content with mere murder either as his body was a prison for billions upon billions of souls and thus he was a deeply malevolent entity, so much so that upon being forced to fall in love for the first time the Topographical Man violently destroyed himself, as the nature of love went against his very essence.

The Topographical Man was considered a godlike threat, far superior to most super-villains and on a par with cosmic forces, while he was not on the same level as truly abstract entities his size alone made him at minimum a galaxy-wide threat and he was stated to have easily consumed billions upon billions of souls, if he was truly the antithesis of life itself he presumably had other powers not seen before he was destroyed. Due to the sheer size of Topographical Man he likely existed in an alternate dimension from mainstream space-time, which would explain why he used smaller avatars (known as Karanada) to absorb others, once absorbed souls would be trapped upon the surface of Topographical Man, which was akin to its own world complete with many cities, landmarks and so forth. a single Karanada was said to hold enough raw power to devour entire galaxies and each Karanada was a "grain of sand" from the Topographical Man - this further suggests that the Topographical Man is a higher-dimensional entity rather than a purely physical giant. 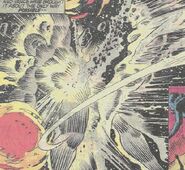 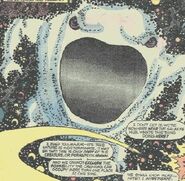 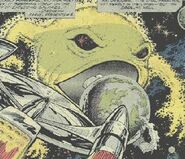 Retrieved from "https://villains.fandom.com/wiki/Topographical_Man?oldid=3328743"
Community content is available under CC-BY-SA unless otherwise noted.