Obtain food from the village.

Grey Zone
Topp is a minor antagonist in Mobile Suit Gundam: The 08th MS Team. She is a mobile suit pilot of the Principality of Zeon military and the leader of a three man mobile suit team.

In late November, U.C. 0079, Topp, along with Arth and Dell her, stopped for food in a village unknowingly inhabited by Kiki Rosita and other anti-Zeon guerrillas. While Topp and Dell did not want to cause any trouble while they were there, Arth stated that they should just take what they wanted.

As Arth continued to act out of line, including lifting up Kiki as she was delivering food to them and nearly killing some children with his ax, Topp ordered him to stop and threatened to kill him if he kept acting provocatively. However, Arth's behavior eventually caused the guerrillas hiding out in the village to attack the three pilots. The guerrillas and Shido charged her crippled Zaku I, but Topp killed all of them, except for Shido with the anti-personnel weapons. She was then killed by Shiro with a rocket launcher. 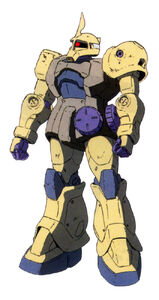