Daughter of the Werecat

To break up Draculaura and Clawd.

To assist Nefera de Nile in her schemes.

In the webisodes and specials, Toralei is voiced by America Young.

In "Fright On!", Toralei was seen only at the beginning, taunting the ghouls as usual. She was later seen at the party, dancing with Dougey after stealing him from a backgrouder girl.

Toralei was one of the two main antagonists in "Why Do Ghouls Fall In Love?" after not being invited to Draculaura's Sweet 1600. She took this to heart and, after overhearing Draculaura's story about Valentine, invited him back to Monster High by using her incanny ability of mimicking. The two schemed to destroy Draculaura and Clawd's relationship, Toralei willing to go at any cost, but eventually being thwarted in the end, facing even more humiliation after the ghouls splashed mud all over her.

Toralei did not have much of a part in Escape From Skull Shores, seeing as she only was seen at the carnival, at which she fell in mud.

She has a cat-like attitude, and is self-assured, with a touch of a sarcastic purr. In "Scream Building", she stands up for the fearleaders when Cleo critiques them, but it seems like it was more about taking Cleo down a peg. She is an opportunist and a manipulator, whose clique of followers never speak for themselves and do her bidding. She causes a lot of trouble for the ghouls, whether it's by revealing their secret routine to their fearleading rivals, texting rumors about them or spreading dissent by playing to people's insecurities.

However shows a softer side to people in need of help, such as a troll named Teala and Cleo de Nile when she was new to fearleading. In light of this, in the webisodes she did actually do Lagoona a favor by forcing Gil to admit he lied and finally confront his parents about their judgmental views on salt monsters.

Toralei also proved in "Monster Mashionals Part 2" that, while she is scheming and manipulating, she is also honest. While she will always do her best to come out on top, she feels that victory is pointless if it is earned by cheating.

Toralei has orange skin (or fur), with a darker orange spot around her eye. She has dark orange tiger stripes running up her right arm and left leg and four on her face. She sports an "emo" styled hairdo, her bangs being longer than her actual hair. She has green eyes, and her pupils are catlike slits.

Just like Purrsephone and Meowlody, Toralei is a werecat. According to the folklore, they are humans who transforms to human-like cats, panthers or tigers. Werecats are very similar to werewolves, because werecats are also known as "shape-shifters".

Werecats are not featured as often as werewolves in popular culture. But a notable movie with werecats is Cat People (1942) directed by Val Lewton. It tells the story of a young woman, who believes herself to be a descendant of a race of people who turn into cats.

In the movie Welcome to Monster High she is more an heroic character then a villain.

In "The Nine Lives of Toralei", Toralei claimed to have five siblings, with whom she was abandoned by their parents. Her story has her siblings being adopted by a troll couple, with Toralei left to fend for herself. Considering the nature of the webisode though, Toralei's story is almost certainly a lie, though it is possible some details are true or partly true. According to Toralei Stripe's Campus Stroll diary, she lives in a steady household with two loving parents. Due to Toralei describing Purrsephone and Meowlody as "like sisters" to her, it seems Toralei is an only child.

Along with Toralei's introduction in "Scream Building" came the introduction of the twin cat girls Purrsephone and Meowlody, whom Toralei in her Campus Stroll diary describes to be like sisters to her. She has made enemies of many of the Monster High ghouls, declaring Cleo an enemy in "Witch Trials" after she wasn't reinstated on the squad, and causing trouble for the team during their fearleading camp and trials. In "Queen of the Scammed" she

texted everyone that Cleo and the squad are going to stay over night at Monster High on Friday the 13th. But they fail when the ghouls stay overnight. One fact is for sure: she's definitely not friends with Cleo de Nile.

According from Cleo's School's Out diary reveals that Toralei and the werecat sisters are on the squad because of her older sister Nefera and is apparently still in touch with her.

Toralei is in a relationship with Rocco from Granite City High. Supposedly, their mutual penchant for playing dirty if that's what it takes to win is what attracts them to each other. 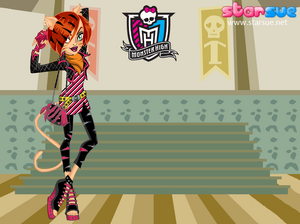 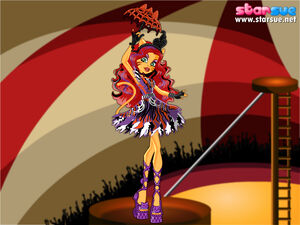 Toralei as a type rope walker in Freak Du Chic. 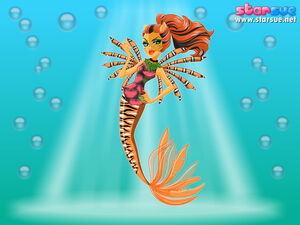 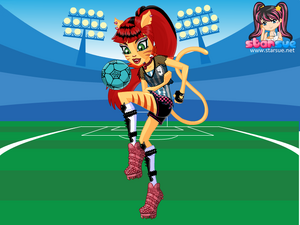 Add a photo to this gallery
Retrieved from "https://villains.fandom.com/wiki/Toralei_Stripe?oldid=3851908"
Community content is available under CC-BY-SA unless otherwise noted.