Protect the master of the Puppets and stay alive at all causes.

Torch is the partly mechanical arson puppet who hates cruel children and adults.

He punishes them all the time by burning them to death until they’re nothing but burned corpse or piles of dust. Torch is the executioner of the group if it’s a child, an animal or adult.

Torch was created seemingly only to kill by the zombified André Toulon in Puppet Master 2. In that film Torch kills an old farm woman, destroying the brain matter he was meant to harvest, kills a child simply for being provoked, is ordered to kill Michael Kenney, and is the only puppet to fatally attack his master when the others turn on him.

In Puppet Master 5, he is loyal to his kinder master, Rick Myers, but still shows occasional aggression, becoming the only puppet in 5 to kill a human (who had attacked Rick). Torch's tendencies have led some to believe he is the violent and cruel Neil Gallagher from part 1, though others have speculated that due to the killings of animals (And Torch's seeming offense when Toulon devalues animal brains) in Puppet Master 2, that he possesses an animal's spirit.

A third theory is that Torch's soul is that of Patrick Bramwell, whose brain Tunneler was seen drilling into. Torch has suffered some injuries throughout his career. He was blasted with a fire repellent as well as whipped and electrocuted by a Totem. Torches place in the group is that of a hit man with Thompson. He has firepower and a brutal attitude. He is the executioner of the group if it's a kid animal or adult. 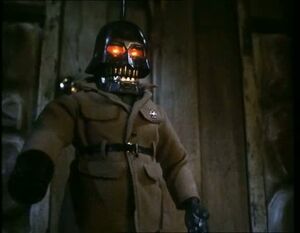 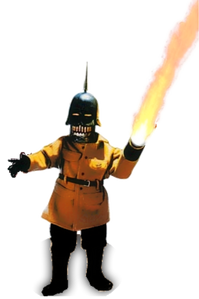 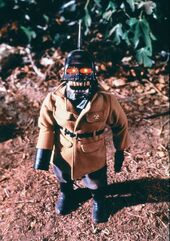 Retrieved from "https://villains.fandom.com/wiki/Torch_(Puppet_Master)?oldid=3552710"
Community content is available under CC-BY-SA unless otherwise noted.