Sunshine Lollipops (by Tom)
Todd (by Matt)
Commie (by Tom)

Leader/member of the Red Army

In the original years, 2005-2008, he served as one of the main protagonists before he left in 25 ft Under the Seat. He returned as a villain in 2010. The character is inspired by a real-world friend of the show's creator, Edd Gould. Tord is Norwegian but lives in the UK alongside his fictional housemates, Edd, Tom, and Matt. He is often depicted wearing red, which is how his villain name Red Leader evolved. He is also the former friend (not Tom) now archenemy of Edd, Tom and Matt.

Prior to leaving the show, Tord was presented as a main character and friend to his housemates, although he was known for his bad temper and violent tendencies. Tord was written out of Eddsworld in 2008, his last appearance happening in the cold opening of 25ft Under the Seat, but he returned for the season finale as a villain. Tord and Tom were generally depicted as bitter rivals, which reached its peak in The End.

He was voiced by Tord Larrson originally, who left the group in 2008. Tord was later voiced by Jamie Spicer-Lewis in The End.

Tord appears as a young adult in his 20s with pale skin and long, spiky light brown hair, with two noticable points at the front of his hair. He wears a light grey t-shirt and a red hoodie along with gray pants. In earlier episodes he sports a black coat and dark brown hair. In The End pt. 1 and 2 he has a square white bandage on his right cheek. He occasionally wears a German pickelhaube and smokes a cigar. At the end of The End pt. 2, the entire sleeve of his right arm is ripped off and his arm is bloody and rendered immobile. A significant portion of the right side of his face is bloody and has deep cuts.

In the first episode of Eddworld, Tord is first seen playing solitaire on his computer, while Edd sends him image of him hugging a teddy bear on MSN. Tord gets angry and armies himself with weapons and files to London via helicopter. After arriving to London, He accidentally kills someone by crashing them with a helicopter. He runs to Edd's road and finally finds his house, He then shoots the 4 Zombehs with his AK-47, finally arriving to his house. When Tord entered Edd's room, Edd already put dynamite/TNT on his chair. The dynamite explodes, it sends Tord flying into a island where is sunbathing.

Edd gives Tord a can of Coke-Cola and deletes the image. Then, He sends a image of Tord crisscrossing to Tom, which shocked him.

25ft Under the Seat

In the beginning of 25ft Under the Seat, Tord packs all of his stuff in the trunk of his car and gets ready to start driving. After wishing his friends an unhappy farewell, Tord hits Tom with the car and drives away.

Although Tom and Tord lived under the same roof (until Tord moved), they had a rivalry history. It started when Tom called Tord a commie and Tord called Tom a Jehovah's Witness (who he actually is). In Ruined, Tom taunts Tord ("In your face, Tord!"), because Edd chose him to go with him when the gang had to split up. In 25ft Under the Seat, Tom says "Good riddance," to Tord when he is leaving, prompting Tord to back his car into Tom. In "The End", Tord calls Tom "Classic Stupid Tom", prompting Tom to leave the household. Later that same episode, Tom throws a chair at Tord's giant robot, also prompting Tord to shoot Tom. He missed as he hit Jon. Tom later shot Tord's giant robot with a harpoon, causing the robot to explode. Tord survived the explosion, but lost skin from his face and his right arm. Although how their rivalry was, Tom and Tord still liked each other as friends. In Ruined when the mummies were trying to attack Tord and Matt, he saves both of them. Also in Eddsworld Halloween Special, Tord and Tom seemed like they're pretty good friends, and they worked together to fool the murderer, implying that they do care about each other, even if they don't show it.

Tord and Edd seem to have a definitely better relationship than Tord with Tom, but the theme of many Eddsworld videos is fought between Tord and Edd. Tord was also the first one, who Edd lived with, just the two of them. 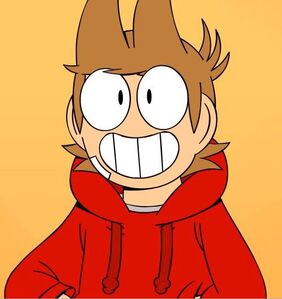 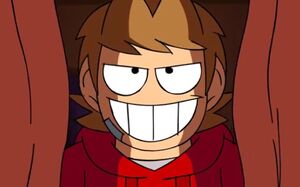 Tord's evil grin and foreshadowing of his true colours.

Tord after being blasted out of his robot.

Tord completing his mission to get his giant robot.

The Red Army symbol, which some believe Tord is responsible of. 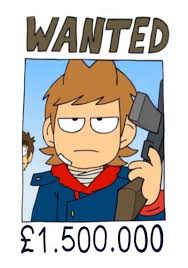 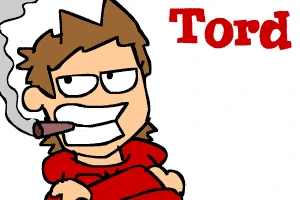 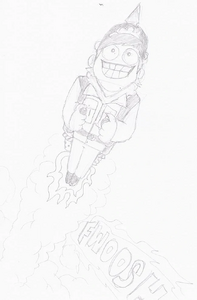 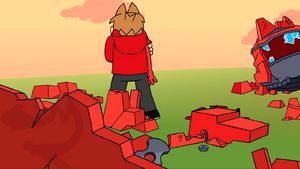 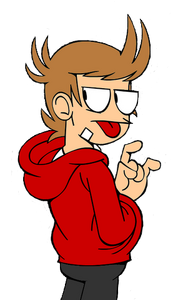 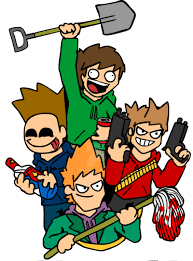 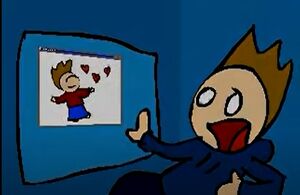 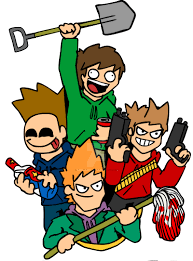 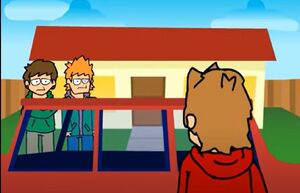