Torneo Rudman is a minor antagonist in the manga and anime adaptation of Black Cat. Torneo Rudman is described as a crime lord that seeks to make a profit off of creating bio-weapons through the use of nanotechnology. Torneo Rudman is said to have some connections with the Apostles of the Star. In the Japanese version he is voiced by Shin Aomori and in the English dub by Grant James.

Torneo Rudman gathered multiple scientists including Tearju Lunatique to create a series of bio-weapons so that he could sell them to anyone who could afford them. To do this Tearju made a clone of herself that was infused to nanites named Eve. Not long after Eve's creation Torneo started to raise her and would started to mold her to think she was merely a weapon that must do as he wanted. As Train and Sven go hunting Torneo Rudman for his bounty they discover that he is having Eve kill some of his less competent minions all while mocking his minions claiming it's only a game for him to watch. Before Eve can kill one of the last minions Train and Sven jump down and try to save the minion while Torneo gets angry. Eventually Torneo is captured and while he is imprisoned Creed sends Shiki whom kills him.

In the anime, Torneo Rudman didn't fund the scientists, instead he merely stole Eve, their research and killed over 10,000 people by blowing up their research facility. Over the course of seven years Torneo Rudman had earned a bounty of half a million dollars due to blowing up the research facility and selling weapons on the black market. As Train Heartnet (aka Black Cat) is sent by Chronos to kill Eve due to how dangerous she can be while Sven seeks to rescue her, Torneo discovers the intruders and orders his men to kill them but everyone managed to escape. Furious he orders Eve to kill one of the guards since he failed him but mockingly saying he would have a chance to earn his life if he could make it to the door before Eve is ordered to attack him. Immediately as the man is about to run Torneo orders Eve to attack him which she does though not fatally before she wonders off. Disappointed Torneo has some of his guards kill the wounded minion. Later he sends men to retrieve Eve and when she is visibly frightened at his presence when she is about to leave with Sven. Having his guards grab her Torneo demands she kills the intruders and when she refused he placed a chip that allowed another entity inside her body to take over. Ultimately Sven is able to set her free by removing the chip. Angered by this and just now realizing his laboratory involving all contained all his research on bio-weapons was up in flames has a mental break down. During his break down Torneo walks into the burning laboratory despite one of his workers pointing out it was too dangerous ultimately dying in the explosion.

Torneo Rudman is shown to be rather quick to anger as when in the anime when someone sneaks into his mansion but got away he ordered Eve to kill one of the guards. Torneo Rudman is shown to be sadistic and vituperative, as he is shown to not only kill his minions for failure but even laughs and smile during it. He shows no concern for anyone other than himself and his own profits. Even to Eve he is shown to be both physically and mentally abusive, such as when he claims she is nothing more than a killing machine, Demon and tool that must obey his every command and would smack her if she showed hesitation.

Torneo Rudman is portrayed as an overweight man in his mid to late sixties that always dresses in a glittering black business suit often with a polka-dotted tie. Torneo Rudman has slicked back gray hair and and seemingly black eyes. On the left side of his forehead it appears he has a burn scar. 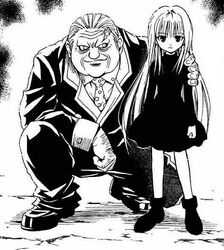 Torneo with Eve in the manga
Add a photo to this gallery
Retrieved from "https://villains.fandom.com/wiki/Torneo_Rudman?oldid=2594103"
Community content is available under CC-BY-SA unless otherwise noted.