The devil
The Disciple of Evil (Spanish edition)

Corrupt Torque completely and get him to give in to madness. (depending on player's choice)

Gigantic Dark Form
Torque's Hatred is one of the main antagonists of The Suffering. Appearing throughout the game as a disembodied voice haunting protagonist Torque, it seems to have little purpose except to drive him to greater excesses of violence and destruction. However, the endgame reveals that Carnate Island has given Torque's Hatred a physical form, one that ultimately serves as the final boss of the game.

Though technically just as much a Malefactor as any other in the game, Torque's Hatred is unique among Malefactors in that it was not born of any external conflict like capital punishment or urban decay, but of the internal conflict within Torque himself. As such, it plays a direct role in the events of the game, though not necessarily a physical one.

It at first has no physical presence, only a voice. Deep, rasping and never raised above a hoarse whisper, this voice can be heard in every single morality decision Torque makes over the course of the game, always encouraging him to take the most violent or selfish options. Exposure to the supernatural properties of Carnate Island gives Torque's Hatred a body of its own. Residing at the docks, this massive creature cannot easily be described even by Clem, who normally turns in succinct descriptions of even the most complicated of the island's Malefactors. On close examination, it resembles a gigantic version of the creature Torque "transforms" into in rage mode. It stands at perhaps thirty to fifty feet tall, and would probably be even taller if it stood up straight, as it appears to be kneeling during the final boss battle. Though primarily modeled on Torque's rage form, it borrows elements from other Malefactors, being swathed in bandages and surgical harnesses like the Slayer, its right arm has been replaced with a chain like that of a Burrower, and even possesses a number of claw-like extensions protruding from its back like the organic turrets of Marksmen (though in the case of Torque's hatred, these extensions literally shoot fire).

Hovering above its head is a barbed halo reminiscent of a crown, a nod to its supremacy over Torque's mind and its nature as an inner demon. In combat, it can induce disorientation via this halo as well. Dangling from the monster's chest is a miniature version of Torque, connected via an umbilicus of sorts; this Toque replica is limbless, seemingly incapable of speech, and can only writhe helplessly throughout the boss battle. Sitting just above the umbilicus is the creature's only real weakness, a fiery red crater leading to its exposed heart, which can only be harmed by bolts of energy supplied by the "rebirth machine."

Torque's Hatred is brutal, impatient, cruel, intolerant, lacking any form of empathy, and wants nothing more than to see its host inflict his darker impulses on the world around him. In contrast to other antagonists in the series, it holds no secrets about its nature, nor does it attempt to lie to Torque in any of the morality decisions - though probably because it simply doesn't possess the capacity to do so. Crude by nature, it only communicates in short, violent statements; occasionally its speech takes a turn for the primitive, becoming disrupted by long pauses as if struggling to assemble a basic sentence, and at one point, it gets so enraged that it can only exclaim "kill him kill him kill him!'"

In keeping with this animalistic perspective, it seems mainly reactive in character. Its physical form does not pursue Torque across the island, and if Clem's testimony is any evidence, it seems content to remain in its position at the docks. Similarly, it only makes itself heard in Torque's head when something provokes its ire: most prominently, it reacts violently to even the most peripheral threat offered, urging Torque to kill anyone who has threatened, attacked or wronged him in any way. It also despises weakness, encouraging the death of those who need Torque's protection and reacting with disgust at Luthor's childlike fear of the Malefactors. It even demonstrates a profoundly bigoted streak, referring to Sergei as a "filthy immigrant" and a "disgusting addict." At times, however, it will simply snap for no reason other than a victim has been left helpless, breathlessly encouraging Torque to activate the gas chamber and let the guard trapped inside die.

Given its title, Torque's Hatred has presumably haunted Torque all his life: as numerous witnesses attest, Torque has always possessed a violent temper that has made his life more difficult than it had to be, often leading to trouble with the law. However, given that Torque's flashbacks to Eastern Baltimore feature him hearing the voice of Blackmore rather than his Hated, it's probable that the rogue personality trait hasn't always been able to literally speak to him, but merely motivate him in the purely chemical sense.

At the start of the first game, Torque has been arrested for murdering his wife Carmen and his two children, Malcolm and Cory - an act that Torque himself cannot remember - he is sent to Abbott State Penitentiary on Carnate Island to await execution. It is here that Torque's Hatred took on a life of its own, for the Island has always been known for its supernatural tendency to bring out the worst in people. In the bonus prologue (only earned via completing the game), Torque first encounters Hatred after being attacked by a trio of inmates at the docks: having slaughtered them through sheer brute strength - which he perceives as a result of physical transformation into his "rage form" - he then hallucinates the physical manifestation of his own hatred, along with the ghosts of his murdered family - glaring down at him from behind the fence. Though not yet confirmed, it is likely this moment in which Torque's Hatred gained awareness and an ability to speak to its host; at some point, the body that Torque had hallucinated also became real, though given the relaxed state of the guards, it likely didn't appear until after the Cataclysm.

Almost immediately after the earthquake, Torque's Hatred begins whispering to him, encouraging him to commit violence and murder on a whim. Over the course of the game, this can result in Torque murdering unarmed guards, killing close friends, betraying potential allies, torturing helpless prisoners with electricity, and subjecting a helpless victim to an agonizing death by toxic gas. For every atrocity he commits under the guidance of his Hatred, Torque appears more disheveled and ugly: by the end, his skin has turned pale grey, and is spotted with diseased-looking lesions, making him resemble a corpse. As if to emphasize his diseased nature, Xombium pills and self-recovery don't heal as much as they normally do. However, if he refuses to give in to his anger, Torque appears much more normal and lively, retains better healing rate.

Eventually after waging numerous battles against Malefactors as well as specters, encountering/confronting many NPCs, going in and out of Abbott Penitentiary and exploring various locations that revealed Carnate Island's unholy macabre history, Torque is led back to the docks in the final chapter of the game, Last Breath Before Dying. While attempting to escape the island via boat, he encounters Dr. Killjoy for the last time; having been working on a cure for the convicted killer, Killjoy explains that in order to fully cure himself, he must face what lies beyond alone and armed with the experimental Rebirth Device. After fighting two doppelgangers brought into physical existence through Killjoy's experiments and the Malefactors that arrive on the scene over the course of the battle, Torque is finally brought face to face with his own Hatred, now towering over him in its monstrous physical form.

After a long and grueling fight against his Hatred, Torque is finally able to deliver a fatal blow to the rogue personality trait, sending its physical form toppling over the side of the docks to a watery grave. Only then does Torque finally remember what happened to his family:

The events of the second game ultimately feature Torque arriving in Baltimore, or being captured and brought there by Foundation mercenaries, presumably as a result of being deprived of Carnate Island, Torque's Hatred does not disturb him again, even if the game began on Evil Karma.

Although Torque's Hatred is no longer haunting Torque, Blackmore takes over its role in goading him to commit evil acts. 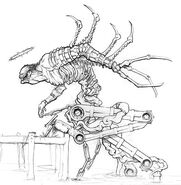 Retrieved from "https://villains.fandom.com/wiki/Torque%27s_Hatred?oldid=4167726"
Community content is available under CC-BY-SA unless otherwise noted.