Tortoise Undead is an Undead who acted as a bodyguard to the Serpent Undead.

Tortoise attacking Blade and Garren to keep them from meddling in Serpent's affairs. However, Hajime Aikawa soon arrives with her seal card to give Garren his Jack Form.

Tortoise Undead was revived as a part of the Dai-Shocker army. Later, when Rider Hunter Silva of Dai-Zangyack and Doktor G of Dai-Shocker overthrew their respective leaders and joined forces to destroy both the Kamen Riders and Super Sentai, Tortoise was among the Dai-Shocker members who took part in the alliance. The two evil organizations united then faced off against the combined forces of the Sentai and Riders. During the battle, he can be seen fighting GaoYellow, GingaGreen, and VulShark.

Tortoise Undead was revived once again as a part of Space Shocker. 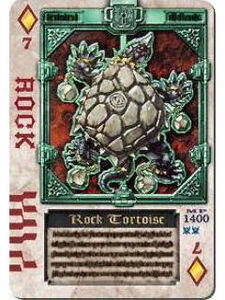 Add a photo to this gallery
Retrieved from "https://villains.fandom.com/wiki/Tortoise_Undead?oldid=2173631"
Community content is available under CC-BY-SA unless otherwise noted.