Caring for her mother and younger brother.
Tormenting Samantha LaRusso.

Beat up Sam for kissing Miguel (succeeded for time).
Aid Miguel in ending the relationship between him and Sam (succeeded).
Be with Miguel forever (formerly).
Make amends with Robby Keene (succeeded).
Get revenge on Sam for stealing her boyfriend.
Defeat Sam and Eagle Fang in The All Valley Tournament (succeeded).
Make peace with Samantha LaRusso (ongoing).

She is a troubled teenager with a dark and cruel past. She joins John Kreese's Cobra Kai dojo and becomes his right-hand student alongside Robby Keene. She is the arch-nemesis of Samantha.

She is portrayed by Peyton Roi List in her first villainous role.

Tory was the daughter of a poor waitress who often struggled to make ends meet. After finishing her shift, Tory's mother would bring home leftover food for her children to eat. However, her manager eventually discovered what she was doing and, despite the fact that the food would have been thrown out anyway, fired her. This helped shape Tory's view of the world as being a cruel place where you have to fight to survive.

After witnessing Cobra Kai's demonstration at the Valley Fest Fair, Tory goes to the Cobra Kai dojo to sign up. When John Kreese asks if any wants to take on Miguel, "the champ", Tory volunteers and faces off against him, fighting him to a standstill.

Tory later goes with Aisha to a country club, where she meets Sam LaRusso and the two develop a dislike of each other when Sam accuses her of stealing her mom's wallet due to her having previously stolen a bottle of liquor from the country club bar. When Sam attempted to check in Tory's bag, Tory shoved her into a cart full of food.

Later, when Miguel goes to her to ask her for advice on repairing his relationship with Sam, Tory instead convinces him to go out with her culminating in them kissing and dating afterward.

After witnessing a drunk Sam kissing Miguel at Moon's party on the last day of summer, Tory decides to seek revenge on Sam the next day on the first day of school. While the school's morning announcements are being read out, Tory bursts into the announcement room and threaten Sam through the intercom. As soon as Sam gets out of class, Tory goes to confront her in the hallway, revealing to the crowd around them that she kissed Miguel before leaping at her and attacking her. Robby Keene attempts to break up the fight but Miguel sees him and believes he is trying to hurt Tory and pushes him away.

The fight then sprawls into a massive brawl between Cobra Kai and Miyagi-Do, leading out into the lunchroom. Miguel attempts to pull Tory off of Sam but Tory shoves him away and continues going after her. When Sam manages to push her back, Tory pulls her spiked wrist collar around her hand and punches Sam with it, gashing her skin. Despite this, Sam still is able to fight Tory off and knock her down a stairway. Tory is later shown to have gotten up, only to witness Miguel being knocked off a ledge by Robby and suffering critical injuries after hitting the ground.

Tory is later shown to be among the students training under John Kreese after he takes the Cobra Kai dojo away from Johnny. When Johnny tries to confront Kreese, Tory and the other Cobra Kai students block his path. It was also told in the hospital that upon hearing about the incident, Sam's mother Amanda angrily swears to have Tory expelled for her actions before demanding Daniel to shut down Miyagi-do.

In the aftermath of the fight that took place in season 2, Tory is placed onto probation after being expelled from school. Her first scene in season three shows her being the victim of sexual harassment at the hands of her landlord, Rodney. Despite showing no remorse or regrets for almost killing Sam and for her part in the school fight, Tori quits Cobra Kai due to her responsibilities to her family. Because she's being forced to work two jobs to pay for her family's rent, Rodney offers alternative methods of payment, those being sexual favors. When Tory refuses, he threatens to call her probations officer to send her to juvie if she attempts to resist. When Kreese notices that Tory is being sexually harassed by Rodney, he beats him up to waive the rent.

Later in season 3, when Sam and the Miyagi-Dos attempt to fight back against when they harass Chris at his job, Tory appears and challenges Sam to a fight. Having Demitri pinned down, Tory psychologically abuses Sam before she encourages Hawk to break Demitri's arm. Afterwards, Tory befriends Robby after he joins Cobra Kai when they find common ground in their broken home lives and their own betrayals from Miguel, Johnny and Sam as well as their resentment towards their probation and expulsion from school for their roles in the school brawl. Upon finding out that Sam has gotten back together with Miguel and helped him save the All-Valley Tournament from being cancelled due to the aftermath of the school brawl, Tory chooses to lead her Cobra Kai gang in an attack on the LaRusso household, engaging the students of Miyagi-Do and Johnny's new dojo Eagle Fang Karate. She singles out Sam, chasing her into the Miyagi-Do dojo and attacking her with nunchucks. When Tory breaks a portrait of Mr. Miyagi, however, Sam regains her resolve and fights back with a bo staff, disarming Tory with Sam defeating Tory a second consecutive time. She attempts to escalate the situation, only to be betrayed by Hawk in the process as well as vowing that her feud with Sam will never end, in which Sam says that she knows where to find her. Tory leaves, but not before vowing revenge on Hawk, Miguel, Demetri and Sam.

On this season, Tory is befriended by Amanda LaRusso who helps Tory find another job and with her mother. Tory is later able to return to school after Amanda gives her permission, revealing that she has come to sympathize with Tory because of her sharing a similar past; Sam later reluctantly agrees as well to satisfy her parents, but she remains suspicious of Tory's motivations. This resulted clashes between them escalating still, especially when Tory was mocked by her at a birthday party and during a fight at the after-party Prom hosted by Stingray. During the All Valley Karate Tournament, she defeats several students from other rivaling dojos including Eagle Fang rookie Devon Lee. At the finals, she faces off against Sam, but Amanda asks Tory to fight within the rules and expresses hope that the match will finally end the rivalry between the two girls.

With Sam combining Miyagi-Do and Eagle Fang techniques, she proves to be a match for Tory, who accidentally elbows her in the eye. Despite Terry Silver encouraging Tory to illegally hit Sam in the other eye to win, Tory, recalling their previous fights, fights clean and wins under the advise of John Kreese. Much to Sam's surprise, Tory expresses genuine concern for Sam's injuries once the fight is over, showing that she has agreed to honor Amanda's request to end her rivalry with Sam once and for all.

Tory's win gives Cobra Kai the All-Valley championship, along with the bet that the losing dojo must close their doors and leave town forever. But Tory is devastated when she subsequently discovers that Silver had bribed the referee to rig the final match between her and Sam in Cobra Kai's favor. This is why he hadn't deducted a point from Tory after her hit to Sam's eye, and had earlier refused to give Sam a point saying Tory was out of bounds even though she stepped out of bounds after Sam scored.

Tory has a confident and outgoing demeanor. She is generally welcoming to those she considers her friends and acts flirtatious towards Miguel. However, Tory also has little regard for most rules, believing in doing whatever it takes to survive including theft. Her philosophy and worldview make her very easily embrace the Cobra Kai motto of "no mercy".

She is very devoted to Miguel and has an intense hatred of Samantha for being privileged and an object of Miguel's affections, causing her to often antagonize Sam and even go so far as to almost tear her face off with her spiked collar after witnessing her and Miguel kissing.

Despite this, Tory seems to be very good at hiding her more vicious and sadistic nature from her friends, as she was able to convince Miguel that Sam was the aggressor in most of their encounters. 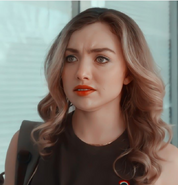 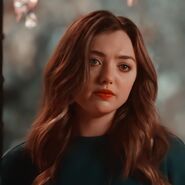 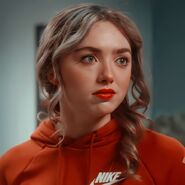 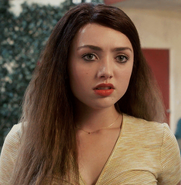 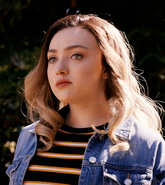 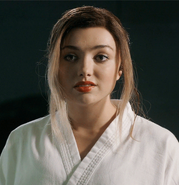 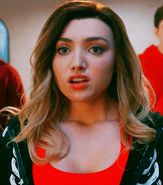