Leader of the Pokeys

Guardian of the orange Royal Sticker

Tower Power Pokey is a supporting antagonist and boss in the Super Mario Bros. series, first appearing in Paper Mario: Sticker Star. He is a gigantic-sized pokey who serves as the leader of his species under the allegiance of Bowser.

Tower Power Pokey was once a normal pokey who resided on top of the Dryback Stadium tower. When Bowser caused the Sticker Comet to split into the six Royal Stickers, Kamek found the potential for the pokey and dropped one on his head, growing him to enormous size. Kamek encouraged Tower Power Pokey to join Bowser's forces and guard both the tower and the crown, before casting a spell on the tower, turning it into a three pieced tablet and scatters it across the Dryback Desert.

When Mario fills in the three tablets of the Dryback Stadium and explores the tower that arose from it, he spots the Royal Sticker at the top, but it is Tower Power Pokey, who was hiding underground and engages Mario and Kersti. Despite his tall height and power, he is no match for Mario's stickers and is defeated, granting the heroes the Royal Sticker.

Tower Power Pokey, or Paper Tower Power Pokey as he is called in-game, teams up with a Big Pokey to serve as a boss in Doop Doop Dunes. The two were summoned by Kamek to guard the entrance of Bowser's Castle and flip over the robe bridge that the Mario Bros. were crossing, sending them into the grotto underneath the desert. The grotto leads to a Toad village, allowing the Mario Bros. to rescue and recruit Paper Toads to build them a trampoline in order to reach a higher section of the grotto containing the segments of the two pokeys, who they then battle and defeat.

Tower Power Pokey resembles a regular pokey in appearance and color but also gains a sparkly sheen due to the power of the Royal Sticker. His eyes are also gold-shaded instead of white. He wears the orange Royal Sticker on his head. Unlike other pokeys with spikes on their head segment, Tower Power Pokey dons a pink flower from underneath his crown, similar to the pokeys from Super Mario Sunshine and New Super Mario Bros. 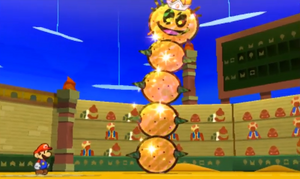 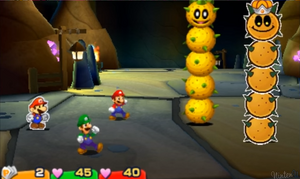