Servant of the Black Hand

The Tower of Sauron is one of the secondary antagonists in the 2014 video game Middle-earth: Shadow of Mordor. He is one of the Black Captains of Sauron, who was corrupted by the dark lord and imprisoned in a suit of armor that gave him an intimidating appearance.

He was portrayed by J.B. Blanc, who also voiced Nigel Bloch in James Bond 007: Agent Under Fire, Enrico Maxwell in Hellsing, Alighiero Alighieri in Dante's Inferno, Diablo in the Diablo video game series, Brian Irons in Resident Evil: The Darkside Chronicles Arkham Bane in the Arkhamverse, Telltale Bane in Batman: The Enemy Within, and Kano in Mortal Kombat 11.

Not much is known about the Tower's past before the events of the game, but he was once a man who was corrupted by Sauron. After being corrupted, he was placed into a set of armor that act as his imprisonment.

His first appearance happened in the 2014 videogame Middle-earth: Shadow of Mordor, where he is seen at the Black Gate helping his fellow Black Captains, the Black Hand and The Hammer, holding the game's main protagonist, Talion, and his family hostage. He demands that Talion drop his sword, which he does, but the Hammer knocks Talion down from behind. The Tower demanded that Talion be brought to the Black hand alive. When Talion regains consciousness, the Tower is seen holding him down whilst the Black hand slits the throats of his wife, Ioreth, and his son, Dirhael, and finally, Talion himself.

During an assault on the Sea of Nurnen, The Tower captures the female warrior, Lithareal. The Tower orders his Uruks to hang her high, so Talion would see her body, but when he leaves, Lithareal escapes with the aid of Talion.

At another assault, at Ered Glamhoth, The Tower is shown sitting inside his fortress, Telling Talion and Celebrimbor, the maker of the rings of power now in a spiritual form linked with Talion, telling Celebrimbor to leave Talion's body and return to the command of the Black Hand. He tells Talion that Celebrimbor chose Talion as his vessel to act his revenge on Sauron and his armies, and that he could release Talion at any time. Talion then draws his sword, to which the Tower stnds up and teleports away, and creates several different versions of himself.

Talion then would have to brand three of them, causing the Tower to return to his throne, using his magic to take the form of Talion's wife, Ioreth. When talion approaches him, the Tower attempts to brand Talion, telling him that he would never see his family again. After overpowering the Tower's Magic, Talion stabs the Tower, causing him to fall down. In rage, Talion proceeds to stab the Tower more with his half sword, then uses his whole sword to stab the Tower in the head, killing him.

Just like the Hammer word travels fast about Talion killing the Tower many of the Uruks can't believe that the ranger was able to kill two Black Captains. There is some dialogue from many of the Uruks found in the game mentioning about the Tower's defeat.

Even though Talion managed to kill the Tower an Orc appears in the sequel Shadow of War wearing the Tower's armor and using his weapons. The Orc even calls himself the Tower and mentions that he is the first Uruk to take up the Tower's mantel and how there will be others to take his place if he falls. Aside from the Orc who calls himself the Tower there are other Orcs in Shadow of War know as Pretenders. The Pretenders wear armor similar to the Tower and the Black Captains to keep the legacy of their masters alive.

The Tower is, as his name suggests, really tall, towering over most men, even his fellow Black captains. He is also the most grotesque and painful looking of all the Black Captains. His skin is deathly gray and his lips are either rotting away or being stretched apart, much like that of The Mouth of Sauron's but much worse. He is bald and has piercing blue eyes. His armor is fused to his skin, causing extreme pain and he has a metal apparatus on his mouth, preventing it from closing, probably another reason why it looks like that. He also has four swords impaled in his back, the two on the end having two banners. He also has a headdress that seems to be implanted into his head.

The Tower is a great representation of the cruelty and pain of Sauron. He is shown as a cruel and merciless character. It is thought that the source of his ceaseless cruelty is the pain that his armor inflicts on him. It is also possible that it has reached the point that it effects him no longer, making him an associate to pain and finding pleasure in the pain of others. His voice his a low and calm voice that automatically betrays his true nature, though he does have an angered tone from time to time.

The Tower can drain his foes, is capable of teleportation, and is a master of illusions. He can also generate clones of himself, they could either be animate or hallucinatory as it is unexplained in the game. He is also extremely strong, as when Talion fails to brand him, he keeps punching Talion enough to disable him and brand him. 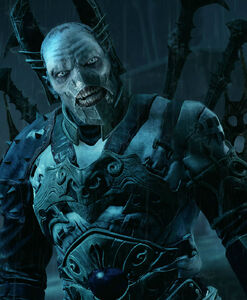 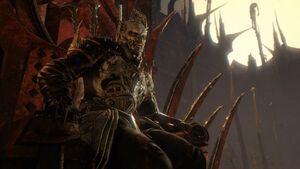 The Tower sitting on his throne. 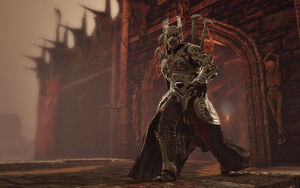 The Tower hunting for Talion. 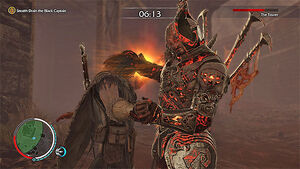 The Tower catching Talion, branding him. 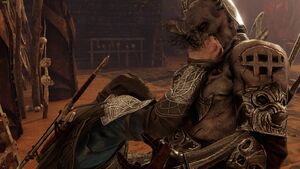 The Tower stabbed by Talion, moments before his death.