Rick and Morty: Rest In Ricklaxtion

Has a toxic humanoid form

Trick Rick and Morty into the machine from the spa to escape to the real world (succeeded).

Get Rick to go into the spa tank (formerly, failed).
Turn Earth toxic using a Moon Tower to transmit the toxicity around the planet (succeeded, but later failed).

Toxic Rick is the main antagonist in the Rick and Morty episode "Rest and Ricklaxation". He is the poisonous embodiment of the negative aspects of Rick Sanchez.

He was voiced by one of the series' creators, Justin Roiland.

Toxic Rick was created after he was separated from Rick after Rick, along with Morty, using an alien spa that literally removes all toxicity and poison from the users. He and Morty are then sent into a toxic and dangerous wasteland within the spa tank where visibly unpleasant and grotesque creatures lived there. At first, both Toxic Rick and Toxic Morty believe the machine destroyed the rest of the spa. However, they soon figure out that they aren't Rick and Morty, but are the toxicity of Rick and Morty. Toxic Rick then plans on escaping the tank. Although he is truly successful, he would eventually be defeated and remerged with Rick.

Toxic Rick is able to contact Rick by sending threatening signals to Rick's phone letting him know that he's in the machine. He tricks Rick and Morty into letting him and Toxic Morty out of the machine (which is in Beth's house after Rick stole it and brought it with him). Toxic Rick then fights Rick which causes mass damage throughout the house. During the end of the fight, he tries to force Rick into getting in the tank but changes his mind, instead planning on turning the whole world toxic. He attempts to do this by using a Moon Tower to spread toxins over the Earth and convert everyone into toxic versions of themselves.

At first Rick refuses to stop them, saying it's not his place to decide which dimensions are saved or destroyed, but upon getting slapped by Morty, he realizes that the detox machine removes toxicity in a user based on that person's definition of toxicity. Toxic Rick manages to succeed in turning the world toxic just as Rick and Morty arrived. Rick realized that his normal self considered his irrational attachments to people toxic, thus he knows Toxic Rick cares too much about Morty to allow him to die: with this knowledge, he shoots Toxic Morty with a virus that will destroy him, cutting that time in half with each progressive shot until an agonized Toxic Rick finally agrees and remerges with him, and in a sense, destroying him. Toxic Morty would also remerge with Morty near the end of the episode.

Toxic Rick is the toxic part of Rick Sanchez. Because of this, he is a cunning, maniacal, treacherous and manipulative individual. Since Toxic Rick is a part of Rick, he is also quite knowledgeable and intelligent to create advanced technology and uses this to his advantage in the episode. 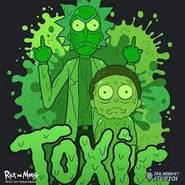 Retrieved from "https://villains.fandom.com/wiki/Toxic_Rick?oldid=3489448"
Community content is available under CC-BY-SA unless otherwise noted.