Ability to turn his body into liquid

Anthropomorphic Robot
Toxic Seahorse, also known as Acid Seaforce in Japan, is one of the eight Maverick bosses from Mega Man X3.

Toxic Seahorse is a Reploid with a liquid metal body, being able to melt and sink to the ground and then reshape himself. After becoming a member of Dr. Doppler's army, he takes over a large dam and the nearby sewer area, restricting the water supply for the humans and poisoning it. He's eventually destroyed by X, who restores the supply of water.

Toxic Seahorse will jump around the arena, then shoot his Acid Burst, which will either bounce between the two walls or bounce around the floor, splitting into smaller globs of acid. After a while, he will melt and reform, usually at the player's position. His weakness is the Frost Shield. 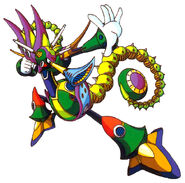