Creating Orgs and trying to destroy the Power Rangers (formerly).
Watching the world and humans.

Toxica is one of the two secondary antagonists of Power Rangers Wild Force. She is Jindrax's partner and best friend, and possibly love interest, a Duke Org and the Mistress of Magic. Toxica is the (former) archenemy of Alyssa Enrilé, the White Wild Force Ranger. She was portrayed by Sin Wong.

Toxica is a Duke Org, the "Duchess of Orgs" and the "Mistress of Magic". Her sorcery can resurrect recently fallen Orgs and cause them to grow into giants by reciting the spell "Evil spirits of toil and strife, give this fallen Org new life" and firing some magic beans from her staff, which grow into vines that entangle and reform the fallen Org.

She and Jindrax hid for centuries after Master Org's defeat, both posing as Animal Control employees, and were the first to rejoin him in the Nexus when he re-emerged. Toxica grew suspicious of Master Org, when she saw him adjust his horn, something no real Org should be able to do. She had developed something of a rivalry to Alyssa Enrilé, the White Wild Force Ranger, for calling her "Grandma".

After General Nayzor was destroyed, Toxica temporarily used his crown to become the General Org Necronomica. She and Jindrax later received newer forms from Master Org when they exposed him and were brainwashed, becoming the submissive slaves Super Jindrax and Super Toxica. However, they were later freed and unleashed the General Org Mandilok to aid them against Master Org. Toxica has also shown how much Jindrax means to her in "Team Carnival", when he eats beans from her magical staff, in an attempt to help his brother Juggelo to defeat the Power Rangers. Toxica tries to stop him, saying he would stay big forever if he grew. Jindrax, however, ate the magical beans anyway, immediately after which, Toxica protested, fearing she was going to lose her best friend. Toxica took Juggelo's place in Team Carnival after his destruction by the Power Rangers, as well as reassuring Jindrax that they were and always will be a team.

During a mission to infiltrate the Animarium with Jindrax and Duke Org Onikage, Toxica touched the sacred water, causing her immense pain. This ended up revealing their presence on the Animarium, and worsening the already fragile trust between her and Mandilok. Onikage tricked her into cutting off her horn, telling her that it would grow back and that without it, she would be immune to the painful effects of the sacred water. While she was saved from the effects of the water and she managed to kidnap Princess Shayla from the Animarium, Mandilok revealed that her horn would not grow back, and the loss of it was weakening her to the point of near-death. When the Rangers tried to destroy Mandilok with the Jungle Blaster, he grabbed Toxica from the ground and used her as a shield. The blast hit her back, causing her to scream out in pain as she quickly died. Jindrax was incredibly devastated by her death, as she was the only friend he had.

However, Toxica would not stay gone too long. Using a magic mirror, Jindrax later receives a message from his partner from the Spirit World, where defeated Orgs rest, saying that the power that sent her there could bring her back as well. After realizing that the Power Rangers' Jungle Blaster was the power that originally ended her life, Jindrax, forcibly, helps the Rangers destroy a new Org, which allowed the Rangers to fire their Jungle Blaster again, which Jindrax quickly intercepted with Toxica's horn, which powered it up enough for Jindrax to then fish Toxica out of the Spirit World. Jindrax was incredibly happy at the resurrection of his best friend.

When Toxica learned Princess Shayla was still being held captive, she knew that Master Org was planning to power himself up and decided she and Jindrax would need to help the Rangers rescue her since if Master Org succeeded he would eventually catch up with them. Revealing themselves, Jindrax and Toxica convinced the skeptic Rangers to let them help rescue Princess Shayla. While the Rangers kept the resurrected General Orgs busy, Toxica and Jindrax snuck into the Nexus and managed to help Shayla escape. Afterward, with no more loyalty to the Org's philosophy, Toxica and Jindrax left to travel the world and find themselves.

More human then many of her fellow Orgs, a blood red horn jutted out of her skull, which was otherwise covered by flowing black hair with purple highlights which she typically covered with a turban-like blue-black helmet. She wore purple make-up on her face. A thin black veil covered her mouth; she wore deep blue body armor on her upper body and a long dress. She filed her fingernails sharp and painted them blue to match her outfit. During the infiltration of the Animarium, Toxica donned an all black skin-tight suit, helping her to blend into the dark jungle surroundings.

As Necronomica, she became a green/white general Org with a single horn green and white and two fan-shaped protrusions each side of her head with pendants on the ends. She had two red, glowing eyes with a black gem sitting between, a wide grim halved with a stained glass-like pattern. She was wearing a green dress with two pointy shoulder plates and a long cape, wielding a short, bud staff.

As Super Toxica, her original outfit gained a black armor, slightly similar to her Necronomica form, although pitch-black and more fanged. 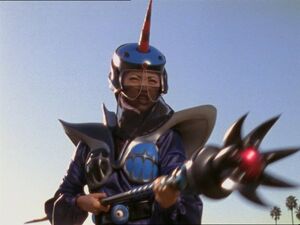 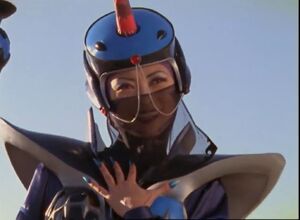 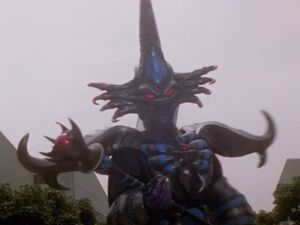 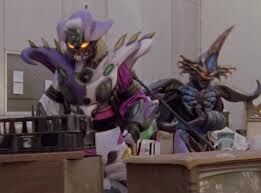