Member of Brotherhood of the Forgotten

Kill Evangelyne and Flopin.
Occupy the highest rank of those of brotherhood killing Echo (all failed).

Toxine (stylized Toxxine) is a killer Sram demi-goddess, member of the siblings calling themselves "The Forgottens". She is a villainess from TV French series Wakfu, in the third season. A well that represents the soul of Toxine, people who have fallen into it have never come out.

Is referred as a psychopath by her own allies, and she doesn't even bother to deny.

She is voiced by Reba Buhr in the English dub.

Toxine is sly, deceptive, and possibly deranged as she is a sadist, enjoying the pain and suffering of others. Her vicious nature puts her at odds with the rest of the Siblings. Her arrogance becomes her undoing however her final act before her downfall was a last-ditch attempt on Eva's life that could very well have killed her and her baby had it not been for Flopin and Echo.

Despite the wishes and orders of her leader, Oropo, she has no qualms about disobeying him simply to satisfy her own wishes and is so vindictive that she would seek to pay a pregnant woman back for anything against her.

She is an outspoken psychopath, taking negligible pleasure in torturing Evangelyne, Flopin and even Eco.

As slim sram dressed in a black suit, without revealing any part of her body, except for his eyes that are two bright corneas. In its extremities it has green phosphorescent tattoos and slips with toe heels.

Of the female members of the Brotherhood of the Forgotten, she's the most eager to mix it up with their enemies in hand-to-hand combat. Nothing screams this more than being invisible, sneak attack with both hands and legs from a dark mist and use traps and illusions. As Joris once said, "It's not fair, it's Sram".

Is a demigoddess daughter of the god Sram and some mortal of same type. At some point in his life, he joined the Oropo clan and became part of the family that he has been for many centuries.

Despite the wishes and orders of her leader, Oropo, she has no qualms in going behind his back simply to satisfy her own wants and she is so vengeful that she would seek payback upon a pregnant woman, Evangelyne, for any perceived slight against her. Seek to infiltrate to the Percedal's house to kidnap Dally sons, while Poo led them into the trap of taking out their spheres, immobilizing both children. In the fight she had with Evangelyne, she took her captive with her arm, threatening her husband not to put up resistance if he didn't want to kill her.

He attacked Eva and her son Flopin when they were in the fourth Eniripsa, trying to throw them at the top of the tower. In this Echo intervened, who saved them before they fell, so he punished Toxine, grabbing her neck for having entering her room without permission, trying to slaughter mother and son.

Above the Oropo tower, in space, Toxine argued with Adamai not to qualify her with teamates as fit to take the place of future gods, calling her a nickname: psychopath.

Following the escape of Evangelyne and Flopin, Toxine and Echo leave the place where Hyperzaap is being built to find the latter two. She's willing to kill Flopin, who - child of a former god or not - is still just a kid. And later, she takes a parting shot that puts Eva's third, unborn child in grave peril.

The half-goddess Sram betrays her superior and tries to kill her, but with the help of the two Crâs, Toxine is finally beaten and Flopin manages to turn her own traps agaisnt her and she's ultimately pushed to a Fate Worse than Death in her own Well of Shadows, which according to her was basically part of her own soul. Thrown into an endless chasm, while having managed to hurt Evangelyne badly.

An update allows the player to occupy his own suit, benefiting with a package of gods for 30 days, and artpotion exceptional.

Appears as a selectable character since the "Brotherhood of Oropo" event.

Makes cameo in manga adaptation, appearing in a frame with an inscription of his name as well as the other demigods recruited by Oropo. 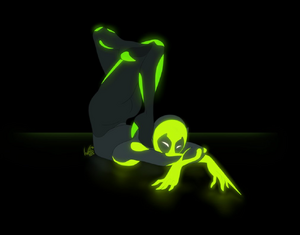 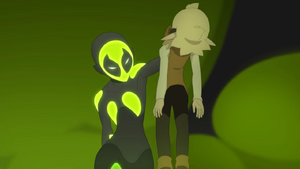 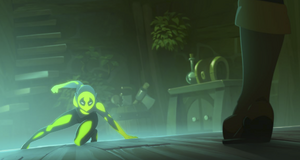 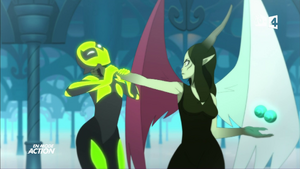 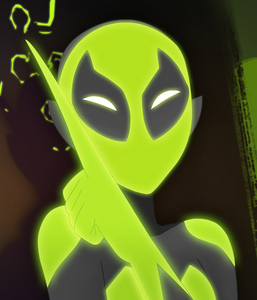 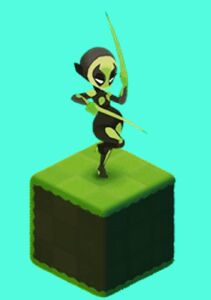 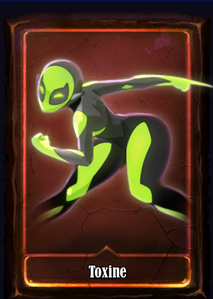 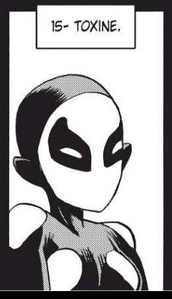 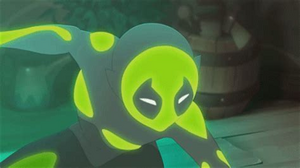