Chating with his plastic goldfish Fishy (reboot incarnation only).

Get his revenge on N-Tek and Max Steel.

Tytus Octavius Xander (also known as Toxzon) is an antagonist from the Max Steel franchise. First made appearance in Max Steel: Turbo Missions, and later as one of formidable villains the titular hero faced in 2013 TV Series.

Titus Octavius Xander, (friendly nicknamed "Tox" by his initials) was once a former N-Tek Agent who, due to his scorn for rules, forced a toxic waste disposal machine to run at full capacity before testing it, without any safety measures on, resulting in a major explosion which contaminated and mutated his own body. As result, ToxZon cannot live or even breathe in a normal environment without the help of a container armor, and requires all kind of chemical contaminants to power up his bio-suit. Being an ex-agent, he's familiar with all techniques, methods and procedures of N-Tek. Using different kinds of chemical waste, he can bring to life little creepy creatures known as "toxoids" which can receive mental commands from him even at a far distance, and acts as a little army of his own. The form and abilities of these creatures varies depending of the chemical used to create them.

As with Max Steel: Turbo Missions, Toxzon was portrayed as former N-Tek member who worked as scientist. Due to his brilliant but twisted mind, he was fired. It wasn't long until he found employment with Trans Human Industries though his colleagues regarded him as unstable sighting the fact that he talks to a plastic goldfish named Fishy.

After Miles Dredd's ejection as CEO of the company, the new CEO Molly McGrath requested a audience with the mad scientist. Contrary to Xander's expectation of praise Molly had called him in to fire him sighting his reckless disregard for human life and twisted deranged mind.

In retaliation, he immediately broke back into his old lab and released a chemical concoction into the building that turned everyone it infected into vicious mindless zombie-like creatures. He was soon confronted by Max Steel seeking to undo his plot and during the struggle, he slipped into a pool of radioactive waste was mutated into Toxzon due to the hero accidentally caused Fishy to tell onto radioactive waste.

The obsessive neat-freak descended even further into insanity and escaped into the sewer after failing to get his revenge on Max Steel. Seeking to increase his new toxic powers he sent two of his Toxoids to break into N-Tek to steal the Tox-bomb, a supremely toxic radioactive/chemical/biological weapon bomb. Initially failing he learned of a new N-Tek weapon C.Y.T.R.O. and decided to use it to steal the bomb.

Max Steel alongside C.Y.T.R.O.'s inventor Roberto 'Berto' Martinez tracked the runaway robot back to Toxzon's hideout and together they regained control over the robot and defeated Toxzon just in time to prevent the bomb from exploding. After Toxzon was sent to prison his suit was drained of Toxins which for the time being neutralized his toxic power. Over the next few week's Toxzon built up his toxic power and eventually broke free.

Toxzon spent the next week gathering supplies to increase his toxic potency, eventually allowing him to create a storm of acid rain to literally melt Copper Canyon off of the face of the Earth. Max Steel was able to inject Toxzon with the neutralizing agent to his storm and he accidentally distributed the antidote himself, though he was still able to get away thanks to the distracted agents.

Following this Toxzon decided to seek revenge on Molly McGrath whom he blamed as responsible for his fall from grace for firing him. He spent weeks perfecting a new toxic virus designed to place it's victims under his control and convert them into toxic monsters like himself. Eventually satisfied he posed as Molly's secret admirer and sent her flowers laced with the viral mutagen.

Molly came to his base under his instructions and completed her transformation into Toxiona, a female version of himself under his control. While Max worked to break his mother from Toxzon's control Katherine "Kat" Ryan and Jefferson Smith lured him into a underwater dog fight where the sea water drained him of the viral mutagen giving him his powers and apparently killing him as he sunk to the bottom of the ocean.

After a thorough sweep all that could be found of Toxzon was Fishy. Little did N-Tek realize that not only did Toxzon survive but became more powerful than ever when he found and absorbed the contents of several radioactive waste silo's. Using his new-found power he held the world hostage his one request being the safe return of his plastic companion Fishy.

After a failed attempt to trick him with a replica the real Fishy was found in N-Tek recycling and thanks to the hallucination's encouragement he detoxified the world's oceans. However the Fish easily convinced him to turn the power that was about to destroy the world on Copper Canyon leading him to be sealed inside one of the waste silo's that gave him his power in the first place followed by being drained again and held within N-Tek.

Several weeks later N-Tek reluctantly came to him for help to deal with the rampaging Ultimate Elementor hoping to use his expertise to neutralize the alien amalgam in exchange for a lengthy list of luxuries to make his prison paradise. However it was soon revealed to be a ruse, the neutralizer he was making was in fact a virus to place Elementor under his control.

A brutal fight ensued between Max and the pair of super villains which eventually ended with Max's use of Turbo Clone mode to overwhelm the pair, followed by the toxin leaving Elementor's body leading to the enraged aliens to seek revenge on Toxzon.

Toxzon is selfish and insane. He has a fondness with creating toxic chemicals and causing mass destruction. Toxzon only cares for his own agendas and what he can gain when he does his evil deeds. He had no remorse for betraying the business that Molly McGrath owned and causing trouble. Despite his wicked personality, Toxzon is willing to protect a tool by the name of Fishy. He hallucinates and imagines that Fishy is a talking fish that really cares for him. When Fishy was turned into Plaztek by one of Makino's men by accident, he was willing to save him despite not knowing that it was actually his fish. When he could not save him, he decided to exact his revenge upon Makino and everyone else that played a role in Fishy's death.

Toxzon has an extensive knowledge on Chemistry. He is capable of creating robots and robotic suits to help him in his conquest. His robotic suit for instance is strong enough to put up with Max Steel and his abilities. He is able to use chemicals as apart of his arsenal and can use it to attack his enemies. Toxzon also seens to have a decent knowledge on technology and can use it to trap people in a video game or to download and steal files and information to assist him in conquest to take over the world. He can also create powerful weapons of mass destruction that is capable of destroying an entire city. He also possesses unique ability to create Toxzoids (renamed Goopanoids), monsters of pure toxin to follow his biddings. 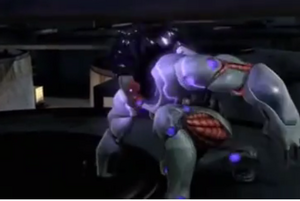 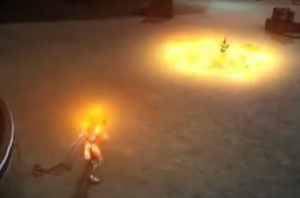 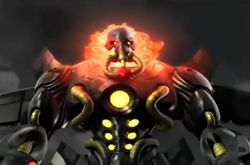 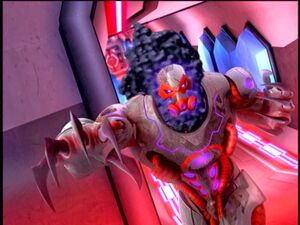 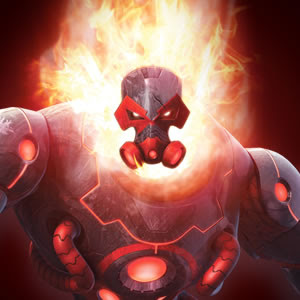 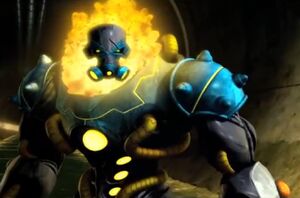 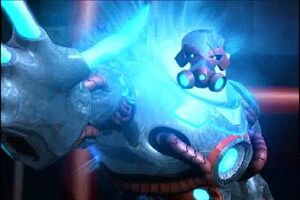 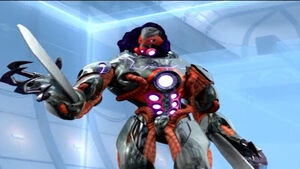 Toxzon showing his daggers
Add a photo to this gallery 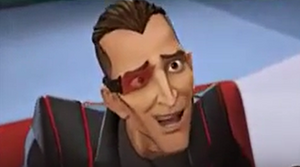 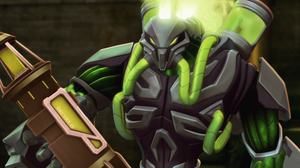 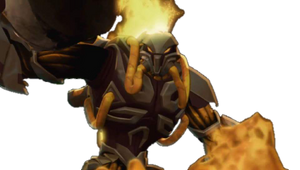 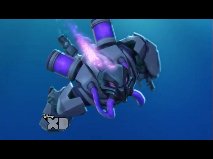 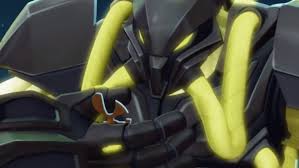 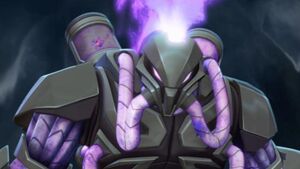 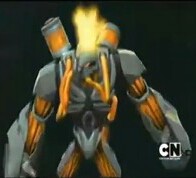 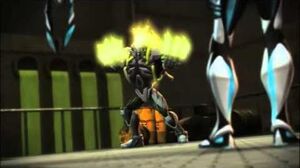 Retrieved from "https://villains.fandom.com/wiki/Toxzon?oldid=3708346"
Community content is available under CC-BY-SA unless otherwise noted.