Sam & Max Save the World

During episode three of the first season of the Sam & Max Telltale game series, "The Mole, the Mob, and the Meatball", the freelance police investigate the unusual activities of the "mafia-free" Toy Mafia.

The Toy Mafia, headed by the enigmatic Ted E. Bear, are an organization of gangsters obscuring their identities with colorful, oversized toy bear heads. They hold up shop in Ted E. Bear's Mafia Free Playland and Casino, offering good times while repeatedly denying any gangster/mafioso involvement (though this doesn't stop them from behaving like mobsters, such as drawing all their guns on Sam should he draw out his). In the nearby toy factory, the Toy Mafia constructed a series of toy bears with the power to hypnotize the masses. It is later revealed that this plot was connected to that of Hugh Bliss and his plan to hypnotize the world.

Sam and Max investigate, but don't get far at first. Using a cockroach with the ability to repeat all it hears, they gain the password to the Toy Mafia's inner sanctum. To become members (and thus take them down from the inside), Sam and Max are tasked with three recruitment jobs: killing their associate, Sybil (for running a witness testimony business), planting one of the hypnotizing bears in their associate, Bosco's, shop and retrieving the mafia's meatball sandwich (which apparently killed the original Ted E. Bear, who choked on it). They manage these tasks (by shooting Sybil's coffee cup full of ketchup to make it appear like a kill, distracting Bosco by using his paranoia against him and regaining the missing sandwich from the one-armed bandit slot machine), but are found out. The duo are pursued by Toy Mafiosos that are later presumably killed when their car is sent off the road.

Back at the factory, they catch up with Ted E. Bear (revealed to be a moleman named Harry Moleman, who becomes a recurring character later). The duo trick Harry into becoming wedged into the machine that creates the hypno-bears, thus destroying their production line and ending the Toy Mafia's business.

Before their defeat, it was shown that the Toy Mafia had surveillance cameras placed all over town and had more operatives walking the street to keep an eye on the situation. However, following the Toy Mafia's end, these members disappeared. 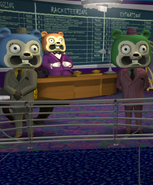 Add a photo to this gallery
Retrieved from "https://villains.fandom.com/wiki/Toy_Mafia?oldid=2296872"
Community content is available under CC-BY-SA unless otherwise noted.