The Toy Monkey is an antagonist in the The Conjuring franchise. It is a musical toy monkey that holds an accordion possessed by a demon, ghost, or dark spirit.

Little to nothing is known about the Toy Monkey or the evil spirit that inhabits it; it is simply known that the item is haunted, cursed, and/or has been used in ritualistic practice. Sometime after the Ed and Lorraine Warren founded the New England Society for Psychic Research in 1952, they came into possession of the toy, blessed it, and sealed it away in their occult museum in their home.

Ed Warren is shown giving a tour of the occult museum to a reporter interviewing him for an article. Ed explains that everything in the room is haunted, cursed, or has been used in a ritual, and that nothing is safe or to be treated like a toy, including the toys. The reporter inspects the toy monkey and reaches out to touch it, but Ed stops him before he can.

Later, the Warren's daughter Judy is at home being babysat by a girl named Mary Ellen and her friend, Daniela Rios. Daniela Rios had just suffered the loss of her father, and waited until the other girls were absent to sneak into the occult museum and try to find a tool to contact her late father. While inside, she touches several haunted and cursed items, including the coins taken from the corpses. She unlocks and opens the case of Annabelle the Doll, but forgets to lock it back up when she leaves. With the demon now set loose, it draws energy and brings the Toy Monkey and other spirits to its aid.

Daniela is locked in the occult museum, and the monkey begins to chitter and screech. A haunted television set is turned on, which plays events a few seconds before they happen in the room. Daniela watches the television, but looks away before it shows the Toy Monkey falling off of the shelf. Sure enough, the Monkey does fall off. Daniela is unaware when the television shows her answering a ringing phone in the room, resulting in her becoming possessed and covered in blood. The monkey begins to chatter again before the phone starts ringing, but Judy and Mary Ellen are able to burst in and stop Daniela from answering it in time.

After Annabelle is locked back in the case, the dark spirit is cut off from its power and the toy returns to its inanimate state.

The toy is seen again among the various artifacts. 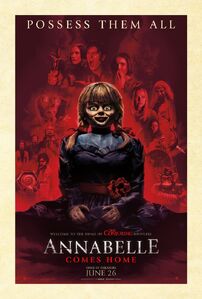 The Toy Monkey on the poster for Annabelle Comes Home. 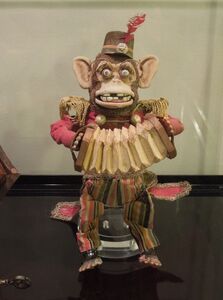 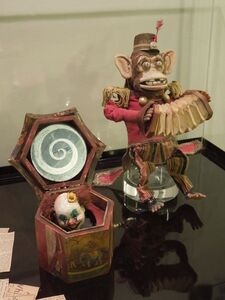 Retrieved from "https://villains.fandom.com/wiki/Toy_Monkey?oldid=3688291"
Community content is available under CC-BY-SA unless otherwise noted.