To ruin the Toyland amusement park, so people would appreciate his toys again (failed).

Toy Robotus is a giant toy robot and the main antagonist of the second chapter in the 2009 video game Scooby-Doo: First Frights. The robot was controlled by a toy maker named Tim Toiler who operated a factory near Toyland Amusement park.

Tim was voiced by Cam Clarke.

Toy Robotus first appears at Toyland, when it tears through one of the tents and scares a security guard away.

In the sewers, Shaggy and Scooby are exploring when Toy Robotus pushes aside a metal door behind them. During the chase, Shaggy and Scooby will have to jump across platforms, choose paths, and avoid falling into the water. Once they reach the end, they will fall down a small waterfall and Toy Robotus won't follow them.

Unlike any other of the bosses in the game, Toy Robotus needs to be activated before you can fight it. Velma needs to use the terminal in the middle of the platform to activate it.
Once activated, Toy Robotus will try to attack with its arms. The goal is to destroy all four of its arms by attacking the weak points. After destroying its arms, it will pull out a laser gun from the hatch on its chest and start moving around the platform. When it stops to reactivate the laser, it will fire one or two missiles at you, which you can deflect back towards its gun. After four hits, it will drop its gun, retract the arm, and lower its head down.

In the final phase, it will begin summoning teddy bears and shooting missiles nonstop. Once again, reflect the missiles back, but this time at its face. After five or six hits, the robot will explode and land on the platform.

With the robot defeated, Tim Toiler comes out of the hatch. Velma explains that Tim Toiler created the evil toys and Toy Robotus to ruin Toyland because he was jealous that it was taking all the attention away from his toys. Tim Toiler was presumably taken to jail afterwards, with his apprentice, Numbers taking over his business. 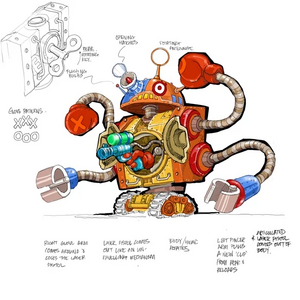 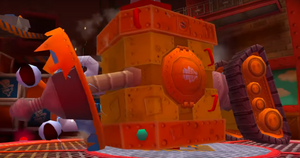 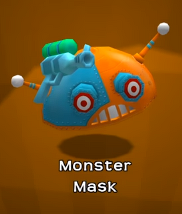 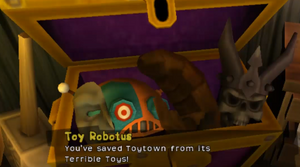 Toy Robotus' head with all the other boss trophies. 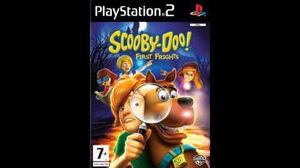 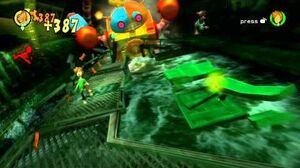 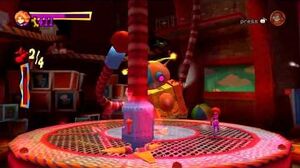