Rescue toys from being thrown away as their owners have "outgrown" them and make them his hostages (failed/formerly).

Have a new kid owner of his own (succeeded).

The Toy Taker is the main antagonist of the 2001 computer-animated Christmas film Rudolph the Red-Nosed Reindeer and the Island of Misfit Toys. He was originally a teddy bear known as Mr. Cuddles, who was thrown away by a boy named Steven after he outgrew him. As a result, Mr. Cuddles disguised himself as the "Toy Taker", a thief who is particularly known for stealing other toys from being thrown away due to their owners outgrowing them.

He was voiced by Rick Moranis, who also played Dark Helmet in Spaceballs. While his vocal sound effects are provided by Don Brown and his singing voice was provided by Bruce Roberts.

Mr. Cuddles was a teddy bear that started as a present given to Steven, and was his favorite gift that he played with. When Steven grew up however, he became interested in other things and forgot about Mr. Cuddles. The teddy bear was put inside a box, was taken to the dump, and his parts were torn apart. Wanting to save other Christmas toys from the fate of being forgotten, he put on a green trench coat, an olive green fedora, sky blue mittens, and wore brown stilts, going under the name the "Toy Taker". He used a magic flute to hypnotize other toys.

At first, the Toy Taker stumbles upon a home and steals several toys inside, and used his hypnotic flute and guided them to his blimp. The Toy Taker proceeded to steal more toys across neighborhoods, leaving children with nothing to play with.

The next night, after stealing the toys right out of Santa Claus's workshop, Rudolph, Hermey, Yukon Cornelius, Bumble, and Clarice set out to find and capture the Toy Taker. The thief is later seen with the captured toys, and tells them why they are there, and tells how kids would outgrow their favorite toys, but dabs the dears off a rag doll and fixing the elephant's nose before leaving. Charlie in the Box refuses to except him as a friend, thinks that the Toy Taker is nothing but a crook, and the toys are just his hostages.

He then succeeds in stealing the gingerbread toys from Castaway Cove, but after plundering the Island of Misfit Toys, the heroes disguise themselves as toys and sneak aboard the blimp that he uses as transportation; he was unable to take Bumble with him because he was "too... ginormous!". Therefore, Bumble was the only one to not be taken by the Toy Taker.

After the group are discovered, the Toy Taker then pushes a button on his control and sends them falling through a trapdoor. They fly back on board and seem to corner him, but he escapes to the top of the blimp, followed by Yukon. However, as Cornelius tries to get closer to the Toy Taker, he leaves holes on the blimp due to the spikes on his cleats, with the Toy Taker reminding him he was "ruining his blimp". At that moment, Yukon is then accidentally thrown off the blimp by a passing Boomerang That Doesn't Come Back, only to be saved by Bumble below.

The Toy Taker is then confronted by Rudolph and Clarice in which Rudolph blinds him with the red light from his nose, prompting the Toy Taker to parachute into the Peppermint Mine. After a long chase, the thief attempts to make a run for it, but is lassoed by Yukon. Once his trench coat and hat are yanked off, everyone watching discovers that the Toy Taker is Mr. Cuddles, who wore stilts to make himself more intimidating.

When Rudolph questions why he would want to steal toys, Mr. Cuddles corrects him that he only wanted to save them from being forgotten by their owners. He tells them the story of how his owner forget him, but Santa assures that Seven still remembers him. Mr. Cuddles apologizes for his actions, and returned all of the toys he had stolen, redeeming himself. He is repaired by Queen Camilla, and is delivered to Steven's daughter by Santa. She wakes to see him and hugs Mr. Cuddles when Steven, now a fully grown adult, looks down to see him. 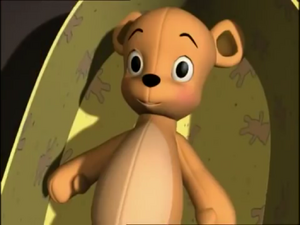 Mr. Cuddles opening up for the very first time. 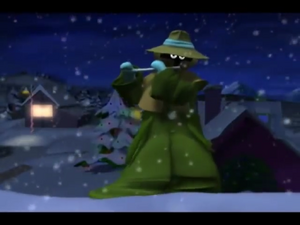 The Toy Taker playing his magic flute to hypnotize toys. 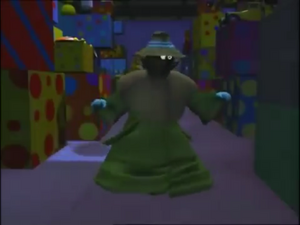 His next target is Santa's warehouse. 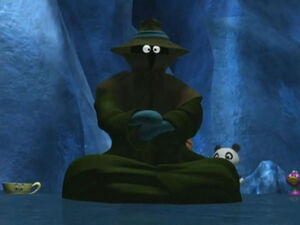 The Toy Taker inside the iceberg with the captured toys. 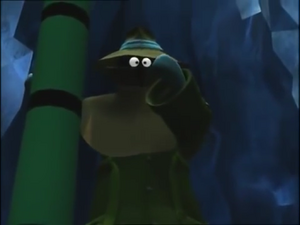 The Toy Taker bidding "adieu" before taking off in his blimp. 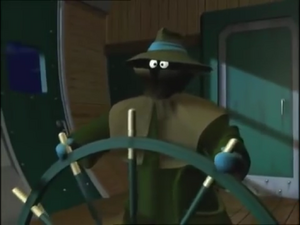 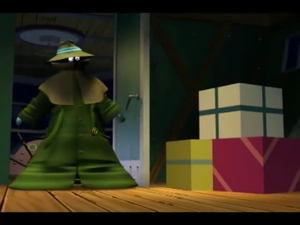 The Toy Taker finding intruders inside his blimp. 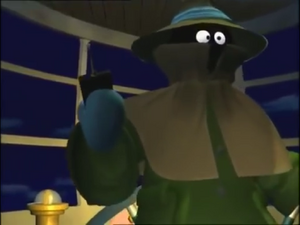 Cornered and nowhere to go, the Toy Taker pushes a button to the blimp's mechanics... 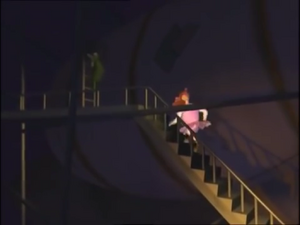 ...but he is quickly pursued by Yukon Cornelius. 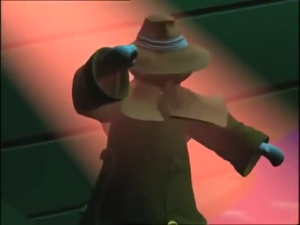 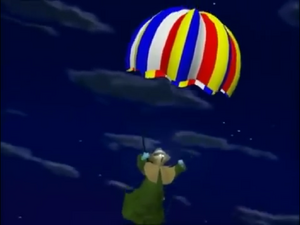 To escape, he parachutes his way down to the Peppermint Mines. 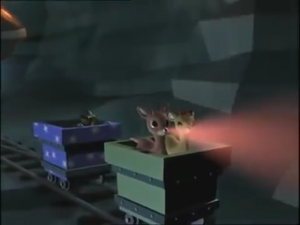 The Toy Taker beginning to tail Rudolph and Clarice on a cart after he was chased by them moments earlier. 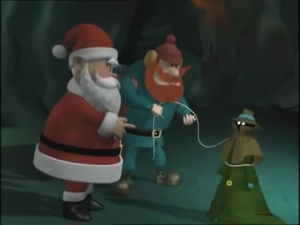 The Toy Taker lassoed by Cornelius and Santa and the gang discover the identity of the Toy Taker. 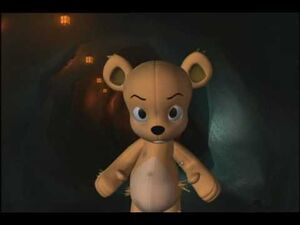 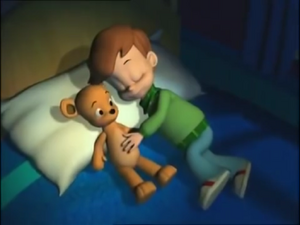 Mr. Cuddles telling the story of how he once belonged to a boy named Steven. 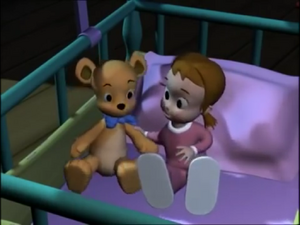 Mr. Cuddles redeemed and becoming the new present for Steven's daughter.
Add a photo to this gallery 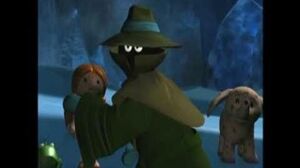 The Toy Taker
Add a photo to this gallery

Retrieved from "https://villains.fandom.com/wiki/Toy_Taker?oldid=3837269"
Community content is available under CC-BY-SA unless otherwise noted.