The Toy Villains (named Ted, Pinky and Vacuum Head) are the three main antagonists of the The New Adventures of Winnie the Pooh episode "How Much is That Rabbit in the Window". They are a trio of counterparts of Winnie the Pooh, Piglet and Tigger. 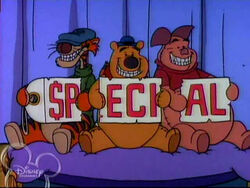