The Trailer Park Mafia is a gang of antagonists in Grand Theft Auto: Vice City Stories.

Their first mission appearance, Victor Vance goes to Marty's trailer for work and he's insulted by a racist member of the mafia calling him "boy" and Victor nearly retaliates until Marty reminds Victor that's he's the leader of the Mafia. Marty then tells Victor that they're having issues with the Cholos who are upset after having lost their brothel. Victor goes to the brothel to save Marty's prostitutes and then refuses to do any more missions for Marty.

Victor stops by Mary-Jo Cassidy's home to see Louise Cassidy-Williams, Marty Jay's William's wife and his love interest. To cheer up Louise, he takes her to quad-bike race and wins for her.

Takin' Out The White Trash

Victor stops by to see Louise again, wanting to get her belongings from Marty's trailer. They go to his trailer, but it's guarded by several of his men. Victor kills all the gang members in his path and collects her things, as well as stealing Marty's wallet. On the ride back to her house, Victor is chased by more members of Marty's mafia, but manages to either escape them or kill them.

Once again, Victor stops by Louise's home, but this time she isn't there. Mary-Jo tells Victor that Marty is planning to kidnap Louise and turn her into a prostitute at his brothel. Victor rushes over to them just as Marty shoves Louise into his truck and drives off, nearly hitting Victor. After a brief encounter with two mafia members, Victor gets into a car to chase Marty and damages his car until he's forced to stop and get out. Once he does, Victor kills Marty and rescues Louise, taking her to his safe house in Little Haiti.

To Victor, The Spoils

After Marty's death, the Trailer Park Mafia is severely weakened and Louise suggests to Victor that he should take over Marty's businesses and wipe out the mafia permanently. Victor takes over Marty's loan shark office and protection racket, forming his own crime family with the help of Louise recruiting members.

The Mafia's final appearance, Victor must save a man with the welfare office threatening to take away Louise's baby from the last of Marty's men. Once they're all dead, Victor threatens him to leave Louise alone, which he agrees to.

With their leader dead and all of their businesses taken over, the mafia was severely crippled. Sometime between 1984 and 1986, the trailer park where they used to live and do their business was demolished and in it's place, a large vacant lot was built. The mafia disbanded soon after, with every member either being dead, in prison, or in hiding.

The Trailer Park Mafia consist of stereotypically dressed rednecks. They all usually have long hair and beards, sleeveless tank tops with the confederate rebel/Dixie flags embroidered on the front, blue jeans, boots, and various hats. 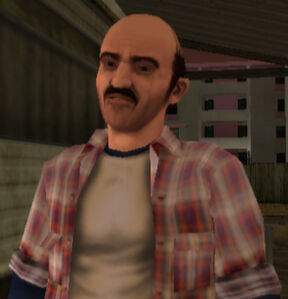