Extreme speed (due to the use of Velocity 9)

Steal money to be able to fund her research (formerly).

Break down an entire bridge full of civillians.

Eliza Harmon, also known as Trajectory, is a minor antagonist in the second season of The Flash. She was a scientist at Mercury Labs who grew schizophrenic due to her frequent use of Velocity 9.

She is the first live action adaptation of Trajectory and was portrayed by Allison Paige.

Eliza worked at Mercury Labs, where she worked alongside Caitlin Snow for a while. After Caitlin left, she had trouble reformatting the extra-cellular matrix for Velocity 9, so she called Eliza for assistance, only giving her a limited number of components so as to not reveal what she was working on. Eliza helped to properly sort out the formula, and so in secret she made some for herself, justifying it to herself by claiming that if Caitlin did not want her to find it she shouldn't have made it so easy. However, from the frequent use of Velocity 9 Eliza grew schizophrenic, creating the evil persona Trajectory.

With the Velocity 9 providing her with the speed of a speedster, Trajectory sped through a nightclub, stealing the money from every visitor as well as everyone else around the club in less then six minutes. This gained her the attention of the Flash, who was frequenting the club with his friends at that time.

Back at her lab, Trajectory realised that her stock of Velocity 9 was all used up. To get more of the Velocity 9, Trajectory speeds to Star Labs, forcing Harrison Wells and Caitlin to create more of it. To make sure that they did not tamper with the Velocity 9 or put a sedative into it, Trajectory uses one of the phials and injects Wells' daughter Jessie with it. While Jesse falls into cardiac arrest, Eliza speeds off.

With the Velocity 9 she walks onto a bridge near Star Labs, running back and forth to create friction and bring down the entire bridge with everyone on it. Indeed the bridge breaks down, separating her from the Flash. To reach her, Barry speeds up fast enough to jump over the bridge, reaching Eliza and taking her down. To be able to defeat the Flash, she grabs another Velocity 9 to use on herself. However, Barry appeals to the woman, trying to convince her that the Velocity 9 is killing her. She injects herself nonetheless. After claiming that she is faster than Barry will ever be, Trajectory runs off. However, while speeding off the lightning around her created by the Velocity-9 turns blue, much like with Zoom's. Moments later, her head erupts into blue fire which evaporates all of her body, leaving only the electrified suit and her mask behind. 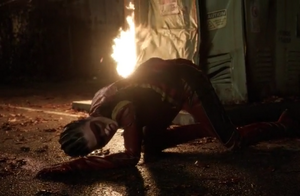 Trajectory after being defeated by Barry 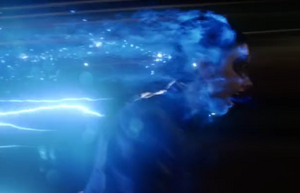 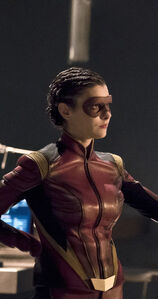 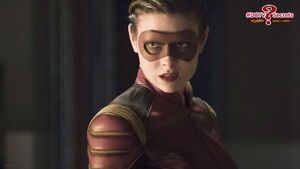 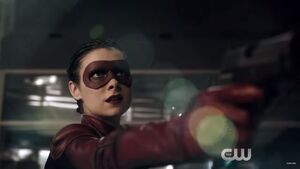