TRF
The Feds (by Jimmy)

Exterminate all Transformers and anyone who associated with them (formerly).

Help Cade Yeager and the Autobots prevent the collision between Cybertron and Earth (succeeded).

Transformers Reaction Force, also known as the TRF, is the secondary antagonistic faction turned anti-heroes in the 2017 film Transformers: The Last Knight. An international paramilitary force, they are tasked with eradicating on Earth of Transformers (whether Autobot or Decepticon), and any human who sympathizes with them.

At the conclusion of the movie, the TRF ultimately switched sides in order to help Cade Yeager and the Autobots in their fight against Megatron and Quintessa in the planet of Cybertron and the TRF was presumably disbanded after the battle.

The Transformers Reaction Force was created as a paramilitary organization with the same intentions as Cemetery Wind; destroy all Transformers, whether Autobots or Decepticons, hiding on Earth because many Transformers have been coming to Earth for years, which they deem to be an "invasion". They were independent of any national government, but they do work closely with many of the authorities (particularly that of the United States and United Kingdom) to eradicate Transformers worldwide. However, they were forbidden from operating in Cuba, as Transformers were granted asylum there under the watchful eye of Raul Castro. Although it is not known who the leader of the TRF is, a unnammed group leader acts as one of the commanders, while Santos is mostly the field commander of the TRF team in the United States. Lennox, a former NEST commander and Colonel of the U.S. Army, has been joined by the TRF as he had experience with Transformers, though he was reluctant to join the newly formed group due to his previous allegiance with the Autobots. General Morshower is also with the TRF, though he isn't the leader of the group and is tasked with supervising them. They've also imprisoned several Decepticons in a few of their bases.

One TRF group worked with the U.S. Army was led by Santos with a former NEST commander, Colonel William Lennox as a liaison to the military. One day, a group of kids led by Izabella were trespassing upon a damaged area of Chicago and they responded by deploying their TRF Walkers and a fighter jet and one of them killed Autobot Canopy as it had been mistakenly identified as a Decepticon.

In the same area, Cade, who had a bounty on him, encountered a dying knight inside the ship that gave him a metallic talisman. After detecting the Decepticon scout Barricade, the group cornered Cade and demanded where he was hiding the Autobots but was freed as the Autobots had more firepower. However, a sniper fired a tracker on Bumblebee so they can follow him and his Autobot comrades.

Megatron contacted the U.S. government, willing to negotiate with them in order to get Cade's Talisman and the Staff. They sent Lennox and a group of lawyers to negotiate the release of several of Megatron's imprisoned soldiers. The Decepticon-TRF alliance proceeded to pursue Cade, his coworker Jimmy, Izabella, Sqweeks, and the Autobots to the nearly abandoned town, with the TRF wanting to apprehend Cade.

In the ensuing battle, Dreadbot, Onslaught, Mohawk and several TRF soldiers were killed because they were outnumbered and outmatched by the arrival of Dinobots (Grimlock and Slug), forcing Megatron, Nitro Zeus and Barricade to retreat. Despite this, an angered Santos summoned a swarm of TRF drones to hunt Cade Yeager, but failed as Cade destroyed all of them. In England, a combined force of British TRF soldiers, London Police officers, and MI6 operatives arrive at the mansion to hunt Bumblebee, Hot Rod, Cogman, Cade, Sir Edmund Burton and Viviane Wembly, but failed as the group escaped both of them, as well as Barricade, during the chase in London.

Teaming up with Navy SEALS, they pursued Cade, Viviane, Bumblebee and Cogman with their own submarines until they reached the underwater ship belonging to the Guardian Knights. They had finally found the group and attempted to take Merlin's Staff, only for Viviane to turn the tables against them until a brainwashed Optimus Prime, who had unexpectedly returned to Earth, took it away from Viviane and exited the ship. Then, Cade ordered Bee to follow Prime and Bee did as he was told.

At the surface of the Knights ship, Bee fought Prime until he was overpowered just as Cade and Lennox came to help out, but failed because of the interference from the sea waves and the rising of the Knights ship. Just when Prime nearly stabbed Bee, the mute Autobot scout finally spoke to his long-time Autobot leader and his voice allowed Optimus' true identity to return.

The TRF had a huge gathering in the field with Cade, Jimmy, Izabella and Sqweeks, as well as the Autobots, as Optimus gave the orders before heading on Cybertron for a big battle. The TRF members led by Santos agreed to work with Cade and Viviane to retrieve the staff, which was being used by Quintessa to harvest Earth's energy for Cybertron's reconstruction. They all tore off their badges after Santos had a conversation with Cade and his final realization that not all of the Transformers are evil.

As soon as they reached the ignition chamber, ex-TRF soldiers, the military and the Autobots fought both the Decepticons and the Infernocons outside the chamber's entrance. Unfortunately, the troops had taken heavy causalities and they decided to deploy an aerial nuclear strike to bring the chamber down. However, this plan failed as the chamber remained operational even though it collapsed.

As the military led by Lennox and ex-TRF soldiers led by Santos watched the collapsing debris of Cybertron, the Autobots successfully reached to the ground, with both Viviane and Cade safely sheltered in Optimus' vehicle mode. After a long battle, the Autobots said farewell to their old human allies as they returned to Cybertron to rebuild it, as well as the planet Earth, and the TRF was dissolved and NEST is reformed in the end.

The TRF seemingly has a lot of equipment that was mostly from the regular U.S. Armed Forces and Cemetery Wind, particularly Humvees, Oshkosh M997 HEMTT, various SUV transports like the Chevrolet Suburban, Chevrolet Silverados, as well as International MaxxPros that are used as troop transports. They also use drone sentinels to patrol no-site zones such as the ones in Chicago to check for any alien activity. They also use the AH-64 Apache Longbow as air support and also have various helicopters as transports. The TRF even use mini-drones that use facial recognition to hunt down their main target, particularly Cade Yeager as he is mostly harboring Autobots. However, the drones are only dispatched to hunt down one individual and don't hunt down their other targets, such as Cade's friend Jimmy or Isabella. If they try to target them, it doesn't kill it but launches a bean bag since the target doesn't have a facial recognition.

The TRF in the United Kingdom is somewhat different from their American counterpart, acting as a special police force to apprehend anyone sympathizing with Transformers. Their main equipment are mostly Lexus RXF Sport SUVs, Land Rovers, as well as Mercedes Benz sedans that are used by themselves as well as MI6. 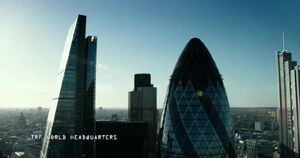 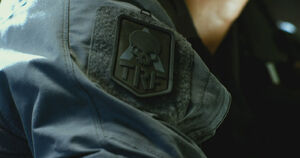 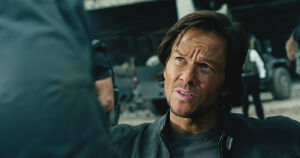 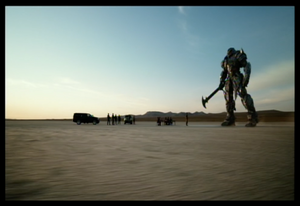 Megatron making a deal with the TRF to bring Cade Yeager to him and his Decepticons. 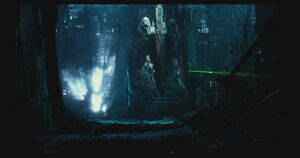 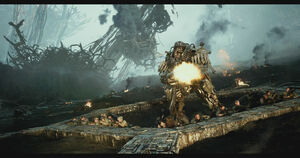 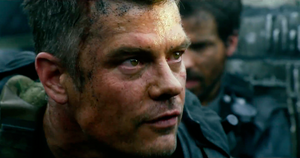