Trash and the Gang

To scare the player
To block the player's view (both successful)

Mischievous Team
Trash and the Gang were a group of poorly made "animatronics" who featured in the Five Nights at Freddy's franchise, first appearing in Freddy Fazbear's Pizzeria Simulator, and become antagonists of Ultimate Custom Night.

No. 1 Crate is voiced by Gwenith Knight.

Trash and the Gang were animatronics who could be bought for Freddy Fazbear's Pizza Place.

No. 1 Crate, Bucket Bob, and Mr. Can-Do appear in the main gameplay of "Trash and the Gang" while Mr. Hugs appears in his own game "Five Nights with Mr. Hugs" that Toy Freddy plays. Pan-Stan is ultimately absent. 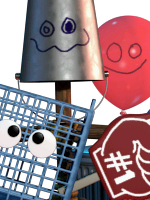 Retrieved from "https://villains.fandom.com/wiki/Trash_and_the_Gang?oldid=4154315"
Community content is available under CC-BY-SA unless otherwise noted.