Have sex with all unmarried women who enter its forest

Hypnotic Rapist
El Trauco is a being appearing in Chilean folklore, specifically folklore from the island of Chiloé. It is a repulsive dwarf-like creature with hypnotic powers that is known to prey on and impregnate unmarried women.

The Trauco is a small, ugly creature of about 80 centimetres height. It is often seen leaning on a magical cane called a pahueldún, as it has no feet and must rely on the cane to walk. The Trauco's pahueldún can also be transformed into a stone axe if the creature wishes, with which it can cut down any tree with just three blows. It is known to wear a conical hat made of quilineja plant.

Trauco is a horrendous creature with powers similar to those of an Incubus. He has variously been described as a dwarf or goblin. The people of Chiloé fear the creature because he has an insatiable sexual appetite for unmarried women, especially virgins. Trauco hangs from the branches of trees waiting for women to come into the forest alone, before fixing them with his hypnotic gaze. According to one legend, Trauco must pursue his victims and will not hesitate to jump into the sea to chase them until they succumb. With his victim now defenceless, the Trauco rapes her and leaves her pregnant. After finishing with his latest victim, the monster then returns to his wife Fiura, an unattractive and sterile creature.

It is not only women who must fear the Trauco, but rather any who enter his forest; he is able to deform the face or break the bones of a man just by placing his gaze on him. The Chilean writer and folklore expert Oreste PlathIn described the Trauco as having the ability to kill or cripple and deform you with a look. In this respect, the Trauco is similar to a Cockatrice or Basilisk in that it can do a person harm simply by looking at them.

However, it is possible for the target of the Trauco's "affections" to avoid him. Plathln states that the creature will often enter the house of its potential victim and makes his presence known by defecating on the threshold (yes, really) or sending the person dreams. In the former case, burning the Trauco's droppings is said to ward him off. It is also recommended that the woman who the Trauco intends to seduce throw a handful of sand at him, at which point he will become engaged in counting the grains and the prospective victim will have time to escape, or land several blows on his pahueldún (as the Trauco is said to feel anything inflicted on the cane). 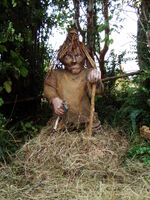 A representation of the Trauco

An artistic rendering of the Trauco