Dumb and Dumber To

Travis and Captain Lippencott are two twin brothers and the secondary antagonists of the 2014 comedy film sequel Dumb and Dumber To.

They are portrayed twice by Rob Riggle, who also played Mr. Walters in 21 Jump Street, Aloysius O'Hare in The Lorax, and Bela in Hotel Transylvania 2.

In the film, Travis is the housekeeper of Adele Pinchelow whom she's having an affair with  she is sent him (Travis) to kill Harry and Lloyd, as he gets killed by oncoming train and then Travis's twin brother Captain Lippencott arrives with Adele and the two attempt to kill Harry, Lloyd and Penny but until Bernard, Adele's husband comes and tells he knew all along about the evil plan of his wife which Captain Lippencott is assist to Adele in her plan leading to Capt. Lippencott and Adele's arrest.

Travis is extremly inept, until his death which reveals that he is not so dimwitted as Harry and Lloyd.

Capt. Lippencott is an eldritch, savvy and insolent assassin, but like his brother he is partially dumb. 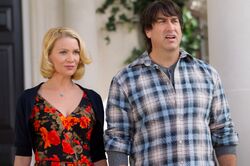 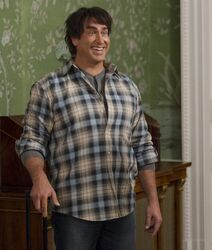 Travis Lippencott
Add a photo to this gallery
Retrieved from "https://villains.fandom.com/wiki/Travis_%26_Captain_Lippencott?oldid=3528016"
Community content is available under CC-BY-SA unless otherwise noted.