Use a satellite-borne weapon named Grazer One to target a nuclear reactor beneath the Pentagon and destroy Washington D.C.

Travis Dane is the main antagonist of the 1995 action/thriller film Under Siege 2: Dark Territory, the sequel to Under Siege. He is a crazed computer genius and cyberterrorist leader who designed the Grazer One satellite weapon for the US government before being dismissed for his mental instability.

He was portrayed by Eric Bogosian who would later portray Arno in Uncut Gems.

Travis Dane is a mentally unstable computer engineer, and the devious brains behind the CIA's Grazer 1 satellite program. He was fired from the CIA due to his mental instability, after which he supposedly committed suicide, leaving behind a cryptic Louis Pasteur quote, "Chance favors the prepared mind." He later resurfaced with a team of mercenaries and a billion-dollar plan to nuke the Pentagon.

Dane, with the help of his second-in-command, Marcus Penn and a team of highly trained mercenaries, hijacks a Grand Continental passenger train heading through the Rocky Mountains from Denver to Los Angeles. Having been offered $1 billion by Middle Eastern terrorists to destroy the Eastern Seaboard, Dane plans to use a powerful satellite-borne weapon known as Grazer One to target a nuclear reactor under the Pentagon. Unfortunately for him, also on board the train is ex-Navy SEAL Casey Ryback. Throughout the course of the film, Ryback neutralises all of Dane's men, kills Penn, and finally confronts Dane himself in the final carriage. Dane claims that Ryback cannot stop Grazer One from destroying Washington, but Ryback shoots the computer Dane is holding and restores control of the satellite to the Pentagon and detonate it with a microsecond to spare.

The bullet also wounds Dane and sends him tumbling out of the train window, just as the train collides with another oncoming train. Ryback races through the exploding carriages before grabbing hold of a rope ladder dangling from a helicopter above him. However, Dane, still alive, grabs his leg and yells out his name to save him. Ryback climbs into the helicopter and flings the sliding door shut, severing Dane's fingers and sending him plummeting to his fiery doom into the explosion.

Dane possesses a genius level intellect and the contempt for humanity that comes with it: he is constantly smarmy, sardonic, and condescending. He exhibits no remorse for the death and misery caused by his actions, and indeed seems to relish it, frequently cracking mean-spirited jokes and addressing his doomed, terrified hostages with frivolity. 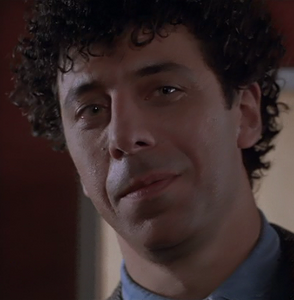 Dane appears on board the Grand Continental train with his henchman, Penn. 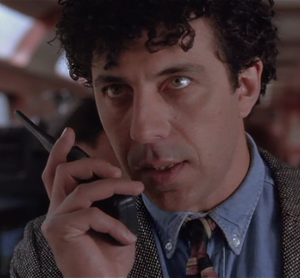 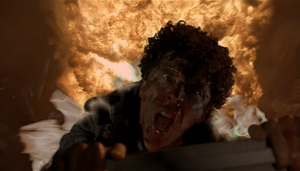 Dane about to fall into a fiery grave.