Kill Robbie and distract the family.

The Tree is a minor antagonist in the 1982 horror film Poltergeist and its 2015 remake of the same name. It is a tree planted outside the family house that becomes possessed by either the Beast or one of the many ghosts haunting the grounds.

The Freelings build their house next to the oak tree, with the father Steven telling his son Robbie that he built the house next to the tree so it could protect them, claiming that it is a "very wise old tree". Robbie climbs the tree during the day, but becomes afraid of its gnarled bark and twisted limbs at night. The Beast, which preys on the family's fears, has the tree possessed one night.

The tree animates during a thunderstorm, smashing through the wall to Robbie and his little sister Carol Anne's room and abducting Robbie. As the entire family rushes out to help him, Carol Anne is left in the room and stolen away through the closet to the ghost's plane.

The tree opens its bark into a mouth, and begins trying to devour Robbie. As Robbie screams in pain and fear, Steven manages to release him from the tree's grip and the two fall to the ground.

The tree then tries to use its roots to grab Robbie again, but a small tornado blows by the house and sucks up the tree, uprooting it and carrying it far away. The family then reenters the house to find Carol Anne missing, and begin a desperate search for her as they battle the supernatural elements that plague their once peaceful home.

In the remake, the oak is replaced by a willow. The Bowen family moves in: Eric, Amy, and their three children Kendra, Griffin, and Madison. Eric and Amy go out for dinner with friends, leaving the children home alone. While there, Kendra is attacked by a corpse-like hand, and Griffin is attacked by a clown doll. Griffin defeats the doll and goes to find Madison, who is taken away into the closet. He then tries to find Kendra, but is grabbed by the long branches of the tree, which snaked inside the house through an open window. The branches tangle around him and drag him outside into the tree's clutches, and the tree attempts to hang and strangle him. However, Eric and Amy arrive, and the tree drops him and returns to an inanimate stage.

In the original 1982 film, the tree appears as a large, leafless, gnarled oak tree with various knots and twists in its bark and long, curved branches and limbs.

In the 2015 remake, the tree appears as a willow with green leaves and long, drooping branches attached to a thick trunk. 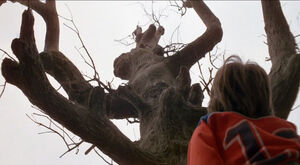 The tree during the day. 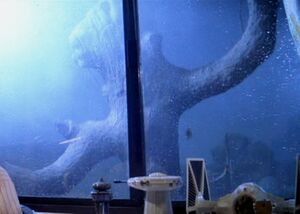 The tree during a nightly rainstorm.

The tree bursts inside the house. 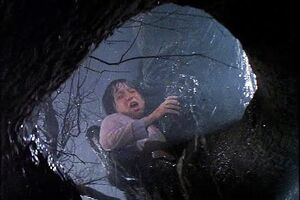 The tree tries to eat Robbie. 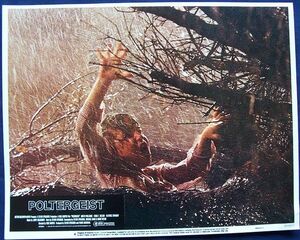 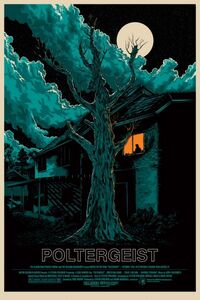 The tree on promotional material. 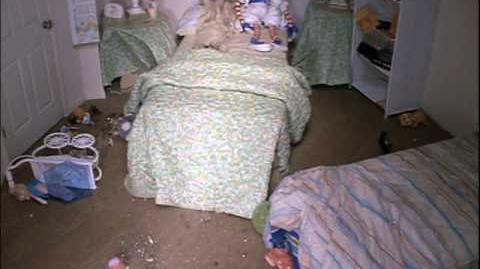 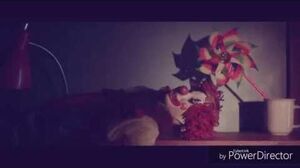