Eventually, the boys decide that they have no other choice than to join up with Stan's sister, Shelly, who is usually mean to them. Stan confesses all to her, and though she softens slightly toward him and takes pity on his fear of Trent, she won't protect him or the other boys unless they also confess to Ms. Clairidge that the fire was their fault. They go find Ms. Claridge, whose machine had broken down on a crosswalk, and apologize to her, intending to admit to their guilt. However, before they can, Trent finds them. He tells them of the rough life he had to endure, and that they got to live normal lives and have amazing adventures while he was locked up in juvenile hall. After his speech, he prepares to attack them, but Cartman, who had taken his mother's taser for protection, fires it at him, but it hits Ms. Clairidge, causing a chain reaction which causes her chair to charge up, crash into several objects in the immediate area, and ultimately catch on fire again. Once again, Trent is blamed for the incident (despite Ms. Clairidge herself even attempting to tell the police that he was not responsible by blinking her light twice when asked if he had done it, which was taken as her saying yes twice rather than just saying no), and he is sent back to juvenile hall. The boys all celebrate, knowing it will be another five years before they have to worry about seeing him again. 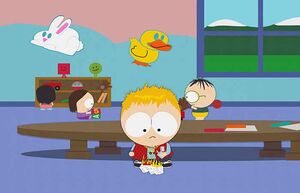 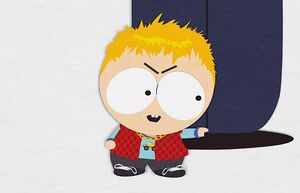 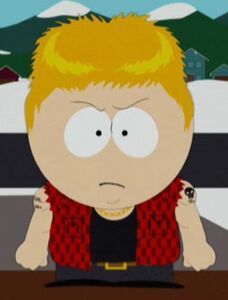 The angry Trent Boyett returns.
Add a photo to this gallery
Retrieved from "https://villains.fandom.com/wiki/Trent_Boyett?oldid=2369700"
Community content is available under CC-BY-SA unless otherwise noted.