Advertising his games.
Hitting on women.

Destroy the Online Multiplayer Network so a competitor can take its place.
Get revenge on Chief and Arbiter.

He is voiced by Jon Graham.

Early in 2011, Trent met Claire Ferguson while he was representing Bad Games at her school and the two began dating. Claire and Trent played Halo: Reach together, and Claire would eventually join Trent's clan, Noob Control. The two soon became engaged.

Their wedding was taking place in-game, in a map Trent created in forge mode. To prevent the possibility of other gamers crashing their wedding, all attendees were only able to spawn with plasma pistols. The wedding also had a staff of security, which included an executive of Bungie, Brian, Trent's two sisters, Victoria and Brittany and two major league gamers, Cameron Jones and Cody Hammond, who acted as security.

Unbeknowst to Claire, Trent was having affair with one of the members of the construction team for the church.

Arbiter first met Trent while he spoke to Claire during a game of Halo: Reach matchmaking. Trent scolded Claire for leaving Xbox LIVE party chat, and then introduced himself to Arbiter as Claire's fiance, and criticized Arbiter's synthetic voice and his stats in Halo: Reach, and insulted his existence. However, when they met again, Trent apologized for what he said, and asked Arbiter if he wanted to try to be friends, which Arbiter agreed to.

Trent later invited Arbiter to a tour of the church that the wedding was taking place in. Master Chief also joined Arbiter. After showing them the church and its staff, Trent asked Chief and Arbiter if they wanted to attend the wedding, to which they both said yes.

Trent later invited Arbiter to the stag the night before the wedding, and also revealed that he had seen his new show, Hypernews. Trent praised Hypernews, and requested that Arbiter include a cross-promotion for Bad Games in the second episode, to which Arbiter agreed to. After the release of the second episode, Trent, along with Nathan and Daniel, two executives of Bad Programming, a company partnered with Bad Games, became interested in purchasing Hypernews.

During his stag, Trent introduced Arbiter to Daniel and Nathan, and left him to negotiate with the two about the purchasing of Hypernews, and went outside the spire. Master Chief, who had been restrained from entering the stag by Arbiter, managed to free himself and joined the stag with the intention of crashing it. However, Arbiter later discovered Trent's affair when he overheard Trent speaking with the female member of the church's construction team. This disgusted Arbiter, who immediately refused the Hypernews deal and intended to tell Claire about the affair. In order to prevent this, Trent ordered Cameron and Cody to boot them from the stag and contacted Brian to have him block their communications with Claire and prevent them from accessing the server in which the wedding was taking place.

Arbiter and Master Chief managed to make it into the wedding anyway, having acquired hacks from Underground Hackers that allowed them to ban players by fragging them. They successfully crashed the wedding and informed Claire of Trent's affair. Claire, outraged at Trent, called off their marriage instantaneously. Trent attempted to ban Arbiter, but was stopped when Chief shot down a plane piloted by his two sisters, resulting in his avatar being killed in the wreckage.

However, as he was not killed directly by Arbiter and Chief's hacked weapons, he was able to rejoin the arena while his staff were all unbanned by Brian. Trent and his associates made a final attempt to ban Arbiter and Chief. However, Greg arrived at the server and killed all of Trent's staff, distracting Trent and giving Arbiter an opportunity to kill Trent in-game, resulting in him having a temporary ban.

As a result of Arbiter and Chief exposing his affair, Trent's public image and reputation was devastated. After the poor sales of Guns of Honor, Bad Games went bankrupt.

Trent was contacted by an acquaintance with an executive position on a network service rivaling with Xbox LIVE's Online Multiplayer Network. His colleague offered him a position as an executive in the company alongside him in exchange for crippling the Online Multiplayer Network. Recalling Arbiter and Chief's use of hacks to crash his wedding, Trent tracked down the distributors of said hacks, who pointed him towards Justin, the developer of the hacks. Justin provided Trent with the updated Fragban, hacks that perma-ban any player that is killed by the user in Halo online.

Following this, Trent hired a clan of hackers known as Chaos Theosis to disband the newly risen Terms of Service Enforcement Response Squad, which was an obstacle in the way of taking down the network. Chaos Theosis was successful in removing TOSERS, but Arbiter and Chief, who had also joined TOSERS and who's accounts had survived the attack on the main TOSERS server managed to frag every member of Chaos Theosis one-by-one, after acquiring Fragban from Xbox LIVE private networks. Trent, anticipating the failure of Chaos Theosis, again contacted Justin, who provided him with a permanent denial of service attack file or "PDOS", which had the capability to bring down the OMN automatically.

Master Chief and Arbiter later discovered Trent was the one behind Chaos Theosis and tracked him down. Trent explained to them everything that had happened since the wedding. Arbiter and Master Chief then attempted to frag him before the permanent denial of service attack begun. Trent quickly ran off, with Chief following him, while Justin fought Arbiter.

Arbiter later caught up to Chief and Trent, but they were distracted again by the return of Clyde, the leader of Chaos Theosis. Trent promised to increase Clyde's payment by 20% if he held off Master Chief and Arbiter.

However, the two managed to defeat Clyde, and Arbiter changed his avatar to resemble Clyde in an attempt to trick Trent. However, Trent deduced that it was Arbiter from his gamertag. Trent bragged that Arbiter couldn't get to him due to his overshield. However, only seconds away from the PDOS activating, Trent was run over by Master Chief, killing his avatar and banning his account, as well as stopping the PDOS and saving the Online Multiplayer Network.

At first glance, Trent appears to be tolerant, laid-back, equitable, and open-minded. However, Trent has little to no emotion and gives little weight to storylines in video games, believing that video games should be about nothing but gory militaristic violence and killing everything on screen; consequently he fires story writers from his company, dismissing their job as "too easy". He has a bleak outlook on life, referring to it as "a big sinking ship" which he uses to justify his sadistic, cruel, malicious, and condescending personality. This is especially seen when Trent reveals to Arbiter that not only does he know that he and Master Chief are toys, but ridicules them for having no purpose but to be abused by children until they are worthless. When he is exposed to Claire for cheating on her, he states that marriage (in his belief) is a "false constitution that represses human nature" which he uses to justify affairs. Trent is also shown to be judgmental and critical at desperate times when he threatens to ban Claire first simply for bringing Arbiter and Chief into his life. All of this leads Arbiter to saying that it wasn't surprising that an ounce on emotion would have a toxic effect on Trent, also asking him who really the plastic one was, and that his bleak outlook on life was extremely poisonous. 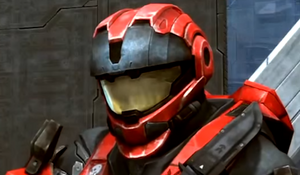 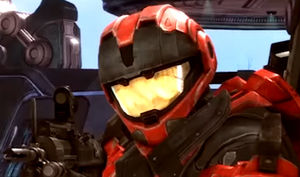 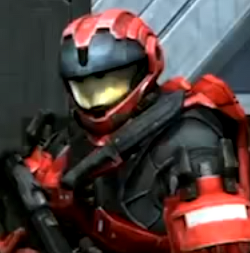