Having sex with women.

Starring in sex tapes.
Showing off his wealth.

Have sex with Jenna (failed).

Trent Sutton is a supporting antagonist in the 2009 Friday the 13th remake. He is the bratty rival of the movie's deuteragonist, Clay Miller.

He was portrayed by Travis Van Winkle.

Trent is a bad tempered, snobbish rich kid who loves to show off his wealth. In the film, he invites his girlfriend and a couple of friends to stay at his parents' cabin for a weekend of sex and partying. His goal for the weekend was to have sex with his girlfriend Jenna, but he is later seduced by her best friend Bree.

On there way there, they stop by a gas station to get gas and other things. While waiting in line, Clay was in front of him asking the owner if he has seen his sister. Then, Trent begins to grow impatient and begins to argue with Clay. His girlfriend, Jenny tells him to stop. When they got to the cabin, he allows his friends to do whatever they want. Meanwhile, Clay stops by Trent's cabin and asks Jenna if she's seen his sister. Jenna tells him to come in and he does. When Trent notices Clay inside his cabin, he tells him to leave which leads them to another argument.

Jenna offers to help Clay find his sister. As they leave Bree seductively offers Trent a beer not knowing she is lusting after him. Later on, Bree and Trent team up to play beer pong but continues to lose. Later that night, Trent is frustrated that Jenna hasn't returned and suspects her of cheating. After Chewie breaks a chair, a frustrated Trent is approached by Bree and she confidently assures Trent that it'll be fixed and seduces Trent into going upstairs with her. Realizing what she wants, Trent gives into his lust and goes with her as they leave the room smiling.

Once inside the master bedroom, Trent and Bree make out with each other before she strips them both of their clothes. Once naked, Trent decides to have unprotected sex with her as even further revenge against Jenna intending to pull out. Bree decides that, without asking, to film their sexual affair in hopes that he impregnates her on camera. As they are enjoying each other, they are interrupted by a returning Jenna, but Trent continues to have sex with Bree. Following their conclusion and intending to continue their night of lovemaking, they both decide to wear minimal clothing when they leave the room. When they came of the room, he's angry to see Clay inside his house and at Jenna for helping Clay behind his back.

Clay tries to warn Trent about Jason Voorhees, a supernatural serial killer who slaughters all who comes in his path. However, Trent arrogantly doesn't believe him until he hears Lawrence getting killed by the aforementioned murderer. Trent then panics, runs upstairs and gets out a pistol from his closet. Trent then hears a noise and accidentally shoots his dead lover’s body several times. Then, Clay and Jenna run out of the cabin while Trent was trying to call the cops. Later, Trent tells Jenna to run with him, but she refuses and decides to help Clay find Whitney. While he was running he gets onto an open road and he almost gets run over by a truck.

The man in the truck offers to give him a lift. At first, Trent is suspicious, but when he sees the man's face, he changes his mind. However Jason appears behind him and stabs him through the back. The driver sees this and so he tries to start his truck. Jason then impales Trent on a rail spike on the back of the truck and the man drives off in terror with Trent's dangling body behind him. 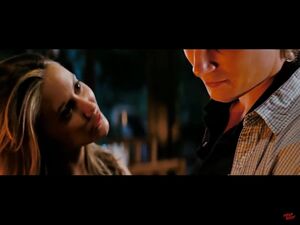 Trent being seduced by Bree. 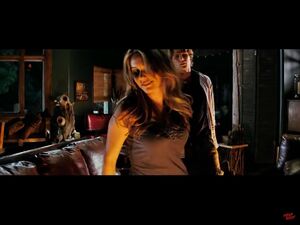 Trent being led away. 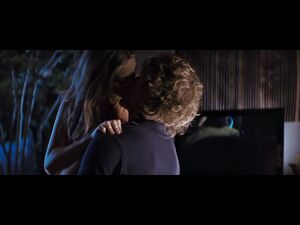 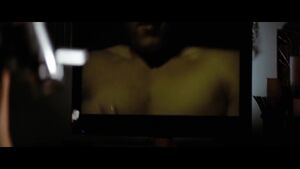 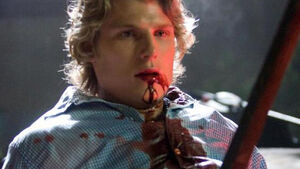 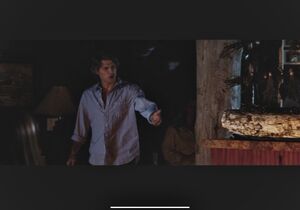 Trent emerging from the room with Bree