Reach Mount Fuji and cause mass extinction (both failed).

Trespasser has been created in another dimension called Anteverse by highly advanced race of sapient aliens known as Precursors in order to completely wipe out human race on Earth so aliens can take over the planet for themselves. Passing through interdimensional portal named the Beach at the bottom of Mariana Trench, Trespasser made its way towards North America. Trespasser has made a landfall in San Francisco at 10 August 2013, causing Magnitude 7.1 Earthquake and ripping Golden Gate bridge in two, sinking hundreds of civilians trapped on it. Conventional weapon has proved completely used against the beast, who proceeded to lay waste in San Francisco, Oakland, Hayward and San Joe for the next 6 days.

Not seeing any other solution, United States of America decided to resort to a use of nuclear weaponry before colossal monster can destroy more cities. Trespasser ultimately met its demise when three tactical nuclear missiles were launched at it. The consequence of Kaiju's death was permanent rendering of a city uninhabitable, as well as overall catastrophic damage to its remains. However, this did not stop the military from removing monster's skull from its corpse before putting it at the public display on museum.

Not unlike other Kaiju in the series, Trespasser doesn't show much of any sort of personality. It displays an extreme aggression and hostility towards human race, being seemingly instinctively drawn to major cities where it can cause most damage. While it seems mostly ignorant to military's assault, Trespasser often occasionally destroys jets that fly too close to it.

Colossal semi-humanoid monster with wide crest-like portrusion on top of its head, bioluminescent-orange interior of mouth, set of disproportionally long arms, smaller set of arms on the chest, turtle-like outer shell, wide fin on the back, bish-like feet, and short tail, standing upright on two small hind legs; Trespasser stands at 302 ft (92 m) tall and weighs 2780 tons. Exposed areas of monster's body are covered in smooth dirty-green skin with orange glowing veins, although its color scheme can be altered in Pacific Rim: The Mobile Game to gray with white veins, reddish-gray with bright-blue veins, gray with bright-green veins, azure-blue with yellow veins or meaty-red with crimson veins. It has large visible flesh gap between ulna and radial bones, making them appear as if they are actually fused. Hands end with three digits with sharp claws, which can penetrate concrete.

A 3D model of Trespasser. 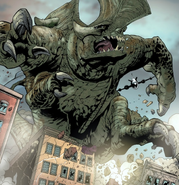 Trespasser, as it appears in Pacific Rim: Tales from Year Zero. 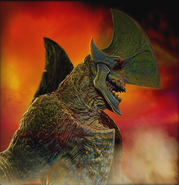