Villains Wiki
Register
Don't have an account?
Sign In
Advertisement
in: Articles under construction, Spoilers, Minion,
and 43 more
English

Having sex
Doing drugs (all formerly)
Talking with Morris

Become rich and famous for the role of The Mandarin (succeeded, but later failed).

He is a drug-addicted actor who was hired by Aldrich Killian to inpersonate the infamous Mandarin of the Ten Rings in order to cover Killian's true plot. However, due to his ruse, Slattery is later captured by Jackson Norriss under the real Mandarin's orders.

He was portrayed by Sir Ben Kingsley, who also played Dr. Xavier Fitch in Species, Don Logan in Sexy Beast, The Hood in the Thunderbirds film, Fagin in the 2005 Oliver Twist film adaptation, The Rabbi in Lucky Number Slevin, Nizam in Prince of Persia: The Sands of Time, Archibald Snatcher in The Boxtrolls and General Woundwort in the 2018 Netflix Watership Down adaptation.

Being a washed-up actor, Trevor Slattery was hired by Aldrich Killian of A.I.M. to pose as the Mandarin as part of Killian's true plan to cover his failed Extremis experiments. To that end, Slattery (posing himself as the Mandarin) publicly announces his responsibility behind a Extremis attack every time one of Killian's experiments failed and caused a great number of casualties. When Tony Stark's friend Happy Hogan was caught in an Extremis attack that left him injured while Slattery took responsibility for the attack, an angered Stark vows to track down Slattery and make him pay for his crimes.

However, unknown to Stark, Killian took the opportunity to kidnap U.S. President Matthew Ellis (thanks to Vice President Rodriguez, who is in league with Killian), just as Stark arrived to confront Slattery in his mansion. However, Stark soon learn that Killian is the true mastermind behind the attacks and that he paid Slattery to pose as the Mandarin to cover his involvement the entire time in exchange for the fame and lavish lifestyle that Slattery desired.

Following the death of Killian and his Extremis soldiers, a drunken Slattery is last seen being arrested for his involvement with Killian. Despite his arrest, Slattery is astounded to see the press awaiting his arrival, feeling very satisfied that he finally got the fame he craved for all his life.

All Hail the King

Slattery was sent to Seagate Prison for his crimes, but he finds it to be quite comfortable living there as he is idolized by many inmates for his actions, even getting an inmate named Herman to serve as his bodyguard and butler. A news reporter named Jackson Norriss comes by for a documentary on Slattery's life. To that end, Slattery explained to Norriss of how he lost his mother during the 1960s and his role as a main character in a rejected TV pilot that aired on CBS.

While relating the history of the Mandarin to Slattery and Herman, Norriss retrieved a handgun he had concealed inside his camera and used it to kill the guards, much to both Slattery and Herman's shock. Norriss then revealed himself to be a Ten Rings operative, as he was assigned by the real Mandarin to take in Slattery for impersonating him. Herman tried to save Slattery by attacking Norriss, but the latter kills Herman by stabbing him in the neck, much to Slattery's shock.

An angry Slattery picked one of the dead guards' guns, intending to kill Norriss to avenge Herman's death. Unfortunately, Norriss disarms Slattery and delivers him to the real "Mandarin" as ordered.

Slattery was set to be executed by the Ten Rings for his portrayal of the Mandarin, which had offended the true leader of the Ten Rings-- Xu Wenwu. However, an impromptu performance of Macbeth entertained his captors well enough to spare his life. Wenwu opted to keep Slattery in his custody for routine performances as a court jester. While imprisoned, he found a Hundun who was abducted from Ta Lo by Wenwu back in 1996; Slattery subsequently befriended and adopted the mythical being as a pet he named Morris.

In April 2024, Slattery would meet Wenwu's children: Xu Shang-Chi and Xu Xialing, along with their friend Katy Chen, who were also captured and incarcerated by the Ten Rings. Slattery and Morris would later be led to liberation by their new friends when they broke into the garage to steal Razor Fist's car. 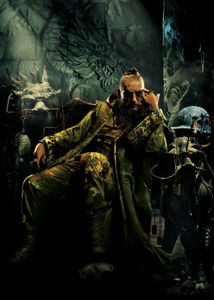 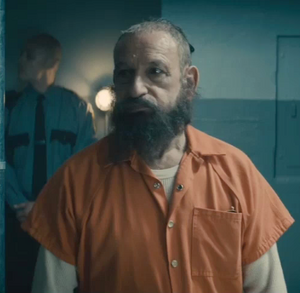 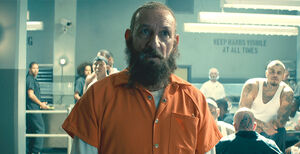 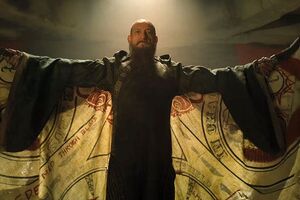 Slattery posing as The Mandarin.