The Triads are one of the major organized crime groups in the dystopian futuristic setting of R. Talsorian Games' Cyberpunk role-playing game.

The Triads originated in the 17th century. Founded by several monks who despite their loyalty and service to the Manchu emperors, were betrayed as their monastery was destroyed and most of their fellow monks slaughtered by the imperial forces. They vowed to overthrow the corrupt regime and each established a secret anti-Manchu society.

Over time they evolved into the Triad and spread across China, multiplying in the number of lodges and in membership. The Manchus destroyed many of them, but like weeds new ones kept appearing. Unfortunately for the monks, the Triads never succeeded in overthrowing the Manchus and gradually mutated into organized crime.

It's a great century for the Triads as they are one of the great winners of the Cyberpunk era. The Chinese Civil War of 1992-2014 ended up benefiting the Triads in at least three ways. For starters it facilitated their overseas expansion by allowing them to get it's enforcers, mules, and prostitutes into other nation-states as "refugees". Therefore the Triad presence in Canada exploded, it turned them into the third largest organized crime group in the United States, and New Zealand now finds itself facing a growing Triad presence.

Second, due to their participation in the war against the revolutionary army of the Maoist Loyalist Cabal (MLC) which was attempting to overthrow the Chinese Communist Party and revert China to Maoism, they became allies of the corporations based in Hong Kong and of the People's Liberation Army in China.

Now they are called "patriotic" and "noble" elements within the Chinese government, which means government influence and protection. Last but not least, China is still under martial law because of surviving MLC cells and within China there is a thriving black market, and naturally the Triads are involved in that business.

Like the other major organized crime groups, the Triads are into a wide variety of criminal activities. Within China there is a huge black market in guns, satellite dishes, cyberware, imported food, and Japanese braindance. Wherever the Triads operate they often have their fingers into vice (gambling and prostitution). They run smuggling operations (drugs, people, stolen goods, etc), face banks, protection rackets, fences, and underground banks. Other enterprises are credstick chopping, designer drugs, counterfeit passports & ID cards, and house invasions. They even control some of the pirate packs in Chinese waters.

The Triads are present in China and throughout the Chinese Diaspora. Overseas among the Chinese Diaspora, the Triads recruit by protecting them from racists and bringing their violet and misguided youth into the Triad. In the United States they hold a stranglehold on the Chinese communities. Unlike the Yakuza or the Mafia, the Triads actually care about their communities to a degree and will invest a significant part of their profits back into the community. Unfortunately turf wars between the Triads in the Far East are exported to Chinatowns around the world.

Triads have a code of honor but it's not as defined as that of the Mafia or Yakuza. It's not a united criminal organization as each Triad is led by it's own Dragonhead, and their is no ruling council or board of directors. The hierarchy arranges, maintains, and controls the Triad's profitable interests while the fighters (Hung Kwan) patrol the streets.

It is among the most violent and trigger happy of crime syndicates, and unlike the Yakuza or Mafia which will break your legs or burn a building, the Triad is likely to dice you up and spread the pieces around the neighborhood as a form of warning. In the United States, the Triads are the most brutal of organized crime groups, terrorizing or killing entire families as a warning to others.

Martial arts and mysticism are used to solidify their groups. Usually members come from the same region and speak the same dialect. They prefer the "Big Suit" look which has the benefit of being fashionable as well as letting you hide armor and guns. Hitters often have cyber modifications and may use various combat drugs to give them that edge. 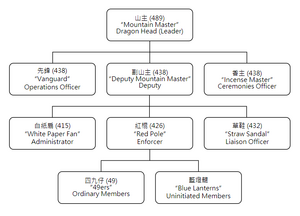 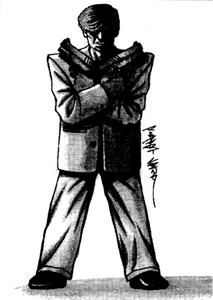