Steal as many hearts as possible.

Defeat Sora and his friends (failed).

Throughout most of Sora's adventure when he was in Wonderland, the Trickmaster would be referred to as the Shadows or the Darkness, especially by the Cheshire Cat.

Before Sora and his friends reached Wonderland, the Trickmaster stole the Queen of Hearts' heart. Enraged that her heart was stolen, the Queen immediately blamed Alice for the theft of her heart. But to show some "fairness", the Queen set up a trial for Alice, even though she was going to plead guilty anyway.

Some time after Sora and his friends reached Wonderland, they eventually encountered the trial. In the middle of the trial, Sora steps in and tells the Queen that if he could find proof that Alice wasn't the culprit, the Queen would let her go. When Sora found enough evidence and presented it to the Queen, she becomes enraged as she sends her Card Guards to attack them.

After defeating a small army of the Queen of Hearts' Card Guards, Sora and his friends are shocked to find out that Alice has gone missing. They rush off to find her, searching all throughout Wonderland, including through passages that allow them to walk on the walls and roof of the Bizarre Room. Eventually, Sora ended up back in the normal Bizarre Room. There, the sneaky Cheshire Cat appears and directs Sora's attention to the roof of the room, from which the Trickmaster appears. The Trickmaster drops down from the roof, and attacks Sora and his friends. After a long battle, The Trickmaster was defeated. Once the Heartless has been defeated, Sora discovers Wonderland's Keyhole and manages to seal it.

The Trickmaster was seen in Castle Oblivion as a figment of Sora's memory in his memories of Wonderland. It was revealed that the Trickmaster was the one who stole the Queen's memory, which caused her to accuse Alice of this crime. After escaping from the Queen with Alice, Sora battles the Trickmaster, and defeats the creature of darkness.

The Trickmaster also reappeared in front of Riku, as a figment of his memory and was a representation of the darkness within him.

The Trickmaster is a powerful Emblem Heartless. Some of it's abilities include generating fireballs, attacking with it's batons, lighting them on fire, and a few other abilities. 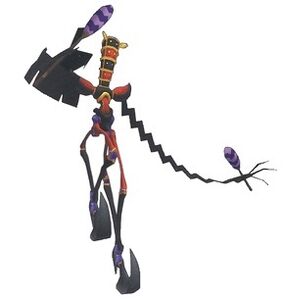