Assassin for the Agency Against Hank Wimbleton

Kill Hank J. Wimbleton over and over.

Tricky the Clown is a major antagonist in the Madness Combat flash series and Hank J. Wimbleton's nemesis. He was an Agency Against Hank Wimbleton member and an assassin under the Sheriff before eventually defecting.

Tricky made his first appearance as one of the many henchmen working for the Sheriff trying to kill off Hank, the main protagonist. He attempted to kill Hank with a M16, but he was killed when his own weapon was turned against him.

Tricky became a prominent character and he attacked Hank on a jet pack. However he was killed when he was impaled on a warning sign. An unknown source revived Tricky as a zombie, this time wielding the warning sign (which would become his iconic weapon). However Hank killed him off again.

After donning a metal mask to hide his zombie features, Tricky became a DJ at Club M under the alias "DJTrickyM". However Hank found his way into the dance hall, where he found many grunts dancing and Tricky acting as a DJ. He shot the clown in the face, knocking him behind the turntable, but the clown quickly recovered and made a gesture meant to say "You're going down!"

The grunts immediately attacked Hank, but he slaughtered them and held Tricky at sword point. Though he at first held up his hands in surrender, suddenly Jesus entered the room with a zombie 1337 agent. Jesus then brought back all the slain enemies as zombies, but Hank fought his way through them and had a quick confrontation with Jesus, ending in both their deaths. Tricky found himself the last person standing in Club M, but shrugged his shoulders, began playing a remix of the Chicken Dance, and danced alone.

Tricky was later contracted by the Auditor to kill Hank and Jesus.

When Jesus and Hank were fighting in the bottom of the valley, Tricky's warning sign popped out of the ground and began moving around, creating fissures. First a bunch of 1337 agents that Hank had killed earlier climbed out, but they were killed quickly. Tricky attempted to climb out himself, but he was shot in the face, dropping him back in. Jesus and Hank resumed their battle, but suddenly reality became compromised and Tricky burst out of the fissure, attacking the two wildly.

Hank was knocked out of the valley where he received a sword and soon found himself confronted by Tricky, who was holding the top half of Jesus's head. The two battled and the zombie clown got the top half of his head chopped off. Hank stopped to rest for a moment, but Tricky suddenly sprang back to life and ripped off his head and slammed it into the ground. Having killed both Hank and Jesus, Tricky turns over to the screen and smiles while doing the peace sign with his hands, declaring his victory against Hank and Jesus.

Tricky appeared trying to replace the missing part of his head with that of Jesus', possibly in an attempt to gain his powers. He loudly declared "THIS DOES NOT WORK!" and threw it away, then caught up with Sanford and Deimos and fought them until they fell outside. Tricky proceeded to start driving a train.

Hank woke up revived and found a gun, a knife, and a note from Tricky, taunting him to find him. Upon arriving at the Improbability Drive, he found the button taped down and another teasing note from Tricky. Out of nowhere a train burst through the building with Tricky driving it. Hank began fighting his way through the train and eventually found his way to the cabin, where he confronted the zombie clown. At that moment, the runaway train leaped over a gorge and crash landed on the other side. Tricky emerged from the wreckage and he and Hank engaged in battle again, with the clown emerging victorious after he stabbed his foe through the neck. But the higher powers revived him and made a building fall between them.

After Hank fought his way through, he found the zombie clown ordering a hot dog from a vendor. Using this distraction to his advantage, he stabbed Tricky in the face, shot him a few times and threw him over the cliff. However the Improbability Drive immediately went haywire and the clown remerged, now as a powerful flaming demon.

Tricky made a brief appearance when he sent the Auditor a message saying that he couldn't be stopped and he would do as he pleased, much to the Auditor's anger.

Tricky and Hank seemed to have had a very short battle since Hank was left partially crushed on the bottom of the gorge. The demon clown leapt down and smashed, burnt, and chewed on him and demanded that Hank get up and fight, since his performance was insufficient and he had not suffered enough. He refused but found himself revived anyway by some unknown source (possibly the Improbability Drive or the Auditor). Angry to be alive again, Hank battled Tricky only to be constantly overpowered by him. After the chase found its way into an elevator shaft, Hank managed to get his hands on a shotgun weapon that he used to fire a round into Tricky's head. It was revealed that there was a Portable Improbability Drive in the demon clown's head and that the shot damaged it. However this did not stop him and Hank was forced to run from Tricky, while the drive made the clown's brain stronger.

Later, after Hank killed some 1337 agents with a chainsaw, their bodies suddenly liquified and were absorbed into a vent. Tricky emerged from this vent, now roughly Hank's size and the two recommenced their battle. However the demon clown still held the advantage and tossed his nemesis through the wall where a 1337 agent and two A.T.P. Agents were working on the Portable Improbability Drive. Suddenly Jesus appeared and killed the two agents, then impaled Hank with his sword saying "Good Night Hank". Tricky appeared and screamed at Jesus for stealing his kill.

Jesus shot Hank with his revolver and then destroyed the Portable Improbability Drive, reverting the clown to his normal zombified form and taking away his powers. Now without his invincibility, Tricky was stabbed in the face by Jesus, finally destroying him.

As the Auditor was being overwhelmed by Hank in their final battle, he began absorbing more and more dead bodies to get bigger and stronger. However he accidentally absorbed Tricky's body, a fatal mistake. The minute that the clown's body made contact with the Auditor, white flames started to come out of his back. Tricky's consciousness resurfaced as the Auditor grew unstable, saying "HELLO AGAIN!" Realizing what had happened, the Auditor said "NO! NO! NO!" but Tricky just said "YES! YES! YES!" A large energy bolt burst out of the ground, lifting the Auditor into the air and causing him to explode into black smoke.

The explosion results in Tricky's ressurection, the theft of the halo and the Auditor's powers, and the unholy fusion between the two reality-warpers begins creating black pools that spawn dark and skeletal grunt-like creatures to go after Hank and Sanford. After the two kill all of the grunts, the abomination reveals its true form as a skeletal version of Tricky's demon form and screams "HAAAAAAAAAAAAAAANK!" Hank attacks the demonic clown by repeatedly punching it with his crustacean-like right arm, but Tricky retaliates by punching Hank back and tearing off his right arm before sending him and Sanford to a purgatory-like dimension.

Inside the dimension, Hank and Sanford are confronted by one of the shadowy skeletal grunts from before, only resembling Tricky and with the Halo atop its head. Tricky summons several A.A.H.W. units to attack Sanford and Hank, but the pair manages to fend all of them off as Tricky summons a stop sign and retreats through a black pool.

Tricky later appears to attempt to kill Sanford as he is killing more A.A.H.W. units, but Sanford injures it by shooting at him and stabbing him through the head with a L337 sword, forcing it to retreat to recover. As Sanford makes his way through the buildings Tricky summoned he is confronted by more skeletal grunts that look like Tricky, only without the Halo. After fighting his way through them, Sanford comes across the Tricky grunt with the Halo and attacks it, only for Tricky to respond by summoning more lookalike grunts to attack him. After Sanford kills all of them, Tricky sneaks up on him from behind and knocks him over to another floating platform that connects sideways via chains to another series of platforms leading towards a pillar of light.

Tricky then attempts to shoot Sanford but Hank comes up on him from behind and attacks him, snatching his rifle away from him before shooting him with it. Tricky's body is bisected by the shots from the rifle before its halo falls off and it falls off the platform. Hank then reaches for the Halo, but another Tricky body obtains it first and punches Hank over to where Sanford is before rotating the platform they are standing on so it tilts sideways, causing them to stand upward on what was previously a sideways platform. Stronger Tricky grunts then begin spawning from the ground to attack Hank and Sanford, but the duo fights them all off.

The two eventually reach the light pillar, where Tricky is now being attacked by his own minions. The Tricky grunt is then punched by Hank into the light pillar. This triggers an explosion from inside Tricky which kills him. Black pools begin to seep from his dead skeletal frame from which the corpses of Hank and Sanford emerge. The Auditor then bursts out of Tricky and takes back the halo, revealing himself to have played both Hank and Tricky into killing each other.

In arena mode, Tricky is a mercenary that can be hired at level twenty. He is missing his mask and is the only character in the game that twitches. Although his trademark mask, the "Iron Slab" can be purchased in the gear shop, it cannot be equipped to Tricky.

Tricky appears in Episode 1.5 in story mode as Dr. Hoffnar, a Nexus scientist who assists Dr. Christoff in his goals of taking down Project Nexus. It is never shown on screen how he becomes the zombified clown, Tricky.

In their search for Dr. Hoffnar, Dr. Christoff and Hank find what become of Christoff's old colleag

ue. Initially, Tricky has no intentions of aiding the duo and instead insists on killing them for his own amusement. Eventually, he tires and decides to kill them with an unescapable laser trap before being interrupted by Nexus Core agents who call for reinforcements when they realize Christoff is present. Enraged that somebody would dare steal his kills, he engages the Nexus Agents and reluctantly agrees to show the duo a secret passage to the Science Tower.

Interestingly, his mask features none of the damage from Madness Combat 4: Apotheosis and onwards, along with the rest of his body.

Though Tricky can use many forms of firearms similar to the way that Hank does, he seems to prefer melee weapons, namely his warning sign. He has great hand-to-hand combat skills and can jump at great speeds and utilize speedy dashes by warping his body. Tricky is also able to revive himself and others through the Improbability Drive and each time he is killed, he grows stronger. In his demon form, he can breath fire, change his size, disintegrate people, and can attack with his sharp claws and teeth and gains great physical strength. 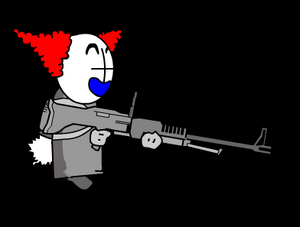 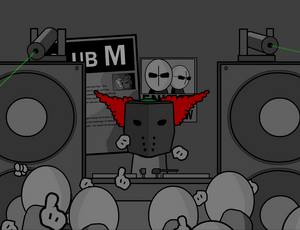 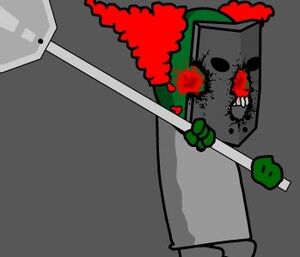 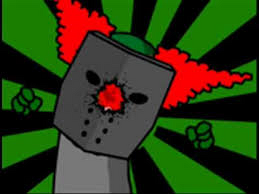 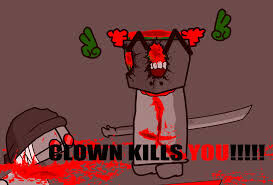 Tricky after he kills Hank. 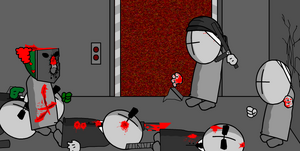 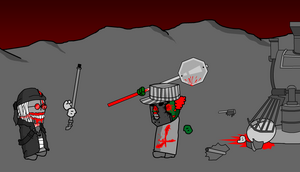 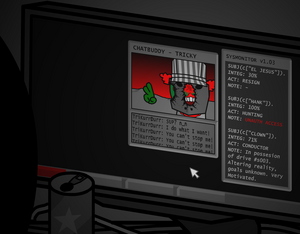 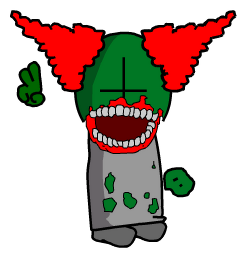 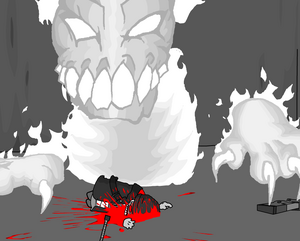 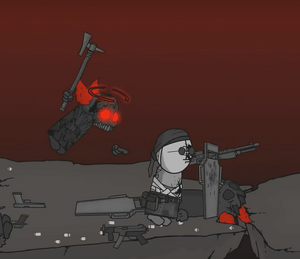 The skeletal Tricky proving to be a nuisance to Sanford. 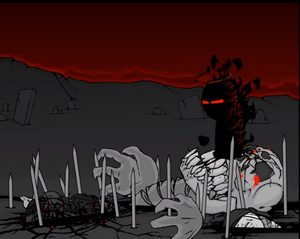 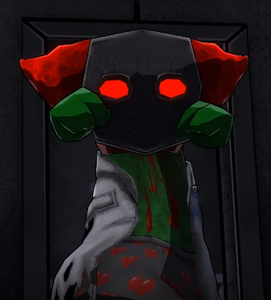 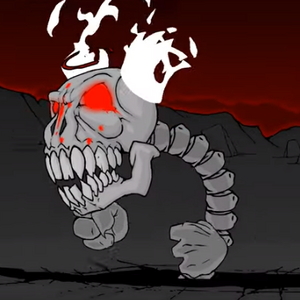 Retrieved from "https://villains.fandom.com/wiki/Tricky_the_Clown?oldid=4151590"
Community content is available under CC-BY-SA unless otherwise noted.