To rule Atlantis and then the land.

Trident is a villain from the Teen Titans franchise.

Sammy along with the other two Tridents worked for the H.I.V.E. Academy they all teamed up and used the similar costume and trident theme. They committed various crimes and frequently fought the Teen Titans. It was even thought that they were all just one man. Although Starfire later discovered that there were three. Sammy, however, tried to cheat the other two out of some of their loot and keep it for himself. The second one Prof however later found this out and killed him.

Prof also worked for the H.I.V.E as an advanced weapons designer. He helped create the trio's tridents which shot a fire blast, ice blast, and a blast of energy. When he found out the first Trident Sammy Jaye was cheating him and the other Trident put of their loot he killed him. However, he and the other one were later sent to prison but were later freed by Secret Society of Super Villains.

Little is known about the third although he did work for the H.I.V.E. along with the other two. After the death of Sammy Jaye who was cheating him and Prof out of loot, he was sent to prison along with Prof however they were broken out by Wildebeest only to be recaptured by the Teen Titans. He later joined the Secret Society of Supervillains.

Trident is a villain from the Teen Titans show. He is a powerful foe from Atlantis and a special enemy of Aqualad.

Trident is first seen sinking a cargo ship and taking with it, containers of toxic waste. This forced the Teen Titans to stop him. Trident attacked their submarine but retreated when Aqualad faced him. While the Titans wait until their sub is fixed, Beast Boy and Aqualad search for Trident's hideout. They find out that Trident uses the toxic waste to clone himself so that he would take over Atlantis and Earth. The clones started fighting when Beast Boy said that which one was the best. While they did not stop the clones from hatching, the other Titans arrived in time to blast the entrance to the cave sealing Trident and his clones inside.

Trident was later freed and was recruited into the Brotherhood of Evil. He teamed up with Plasmus to capture Aqualad and Tramm. They both succeeded and were well rewarded by the Brotherhood. During the final battle with the Titans at the Brotherhood's headquarters, he is defeated by Thunder and flash-frozen with the rest of the villains.

Besides his ability to speak telepathy, swimming at high speeds, and surviving underwater, Trident's other abilities include superhuman strength and his trident which can shoot powerful energy blasts. 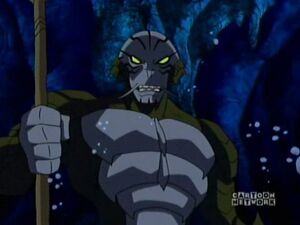