None;probably to defeat the villains.

Protagonist
Triela (Toriera) is one of the main protagonist of the 2003 anime Gunslinger Girl. Though she is the leading protagonist, she is considered a anti-hero due to her personality and brutal deeds to her enemies.

Triela originally came from Tunisia, Triela was kidnapped and import to Amsterdam by the Mafia, where she was drugged, tortured, and raped during the routine taping of a snuff film. Victor Hartmann and Rachelle Belleut, acting on a lead from guilt-racked Camorra mafioso Mario Bossi, stormed the warehouse where she was being held captive/hostage and some people immediately rescued her, just as she was succumbing to her injuries and cardiac arrest.

A person helped her named Belleut, a medical doctor from France, successfully administered cardio pulmonary resuscitation on Triela before she herself died from a gunshot wound to her left kidney, sustained during the smoke of the building. Triela never clearly saw her savior's face, but always distinctly remembers the smell of her perfume, and now mistakenly believes, due to her conditioned memory, that Belleut was her mother. Dreaming once about the episode while anaesthetized for surgery, she later tearfully recalls "She wore glasses and had the faint smell of perfume. And she held me so gently." Following her savior's death, Hartmann fell from grace and was expelled from Europol, his employer. Jobless, he assumed the alias Victor Hilshire, and accompanied Mario Bossi back to Italy in search of superior medical facilties to rehabilitate Triela, whose right leg had been cut off as part of the torture she'd endured, and was otherwise severely maimed. 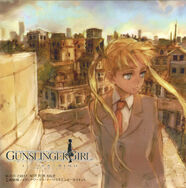 Triela in the poster of Gunslinger in 2003.
Add a photo to this gallery

Retrieved from "https://villains.fandom.com/wiki/Triela?oldid=3554052"
Community content is available under CC-BY-SA unless otherwise noted.