Lord of an inter-dimensional netherworld

Father of Raven
Embodiment of evil

Take over the earth and the entire universe.

Trigon is the main antagonist of the 2016 animated film Justice League vs. Teen Titans. He is an extremely powerful inter-dimensional demonic entity and conqueror of worlds, and the father of Raven and the sons of Trigon.

He was voiced by Jon Bernthal, who also portrayed Punisher in the Marvel Cinematic Universe

When a young rebellious and gullible woman joined a Satanic cult and was selected to take part in an ancient ritual to bind her to the Devil in marriage. The rite worked and Trigon appeared to them as a mortal man. The woman lay with him but learned who he truly was and hen raped her. She fled from the cult and went on the run. She was approached by people from the interdimensional realm of Azarath and given a new start. There as Arella, she raised her and Trigon's daughter, Raven. Raven didn't fit in and thought if she found out more about her father, she would be able to make more sense of herself. Instead, she accidentally brought Trigon to Azarath. Trigon destroyed Azarath and killed its residents then took Raven back with him to his realm, a hellish universe.

However, Trigon desired Earth but needed a powerful conduit to open Earth to his control. Since Raven was half-human, she could serve as that conduit. Trigon underestimated Raven's magic and was trapped inside a crystal. Raven sealed the crystal within a floating structure that only she could open. Raven wanted a home and went to Earth. She was taken in by Starfire at the Titans Tower. Without asking, Raven placed a protective spell on all the Titans to prevent Trigon from corrupting them. Trigon sent his sons, the Corruptors, to Earth in search of the means to his rising, Raven and the Infernal Shrine. While the possessed Superman unearthed the shrine 60 miles north of Kahndaq City in the Middle East, the others found Raven at a carnival and told her to go to the hill beyond the tent. Trigon made contact and declared it was their destiny to be together because they were family. He implored her to bring him to Earth. She refused and vowed to fight him at every step. The Corruptors opened fire on her.

Trigon mocked her for letting herself become weak and lonely and aligning with chattel. He found it beneath his contempt and vowed she would know his glory. The other Teen Titans joined her in battle until she eventually used her soul self to banish the Corruptors. Raven teleported the Titans to Azarath to shield themselves from Trigon and reveal her origins to them. They returned to the Tower but the Justice League arrived and wanted to take Raven into their custody. Robin objected but the stand off was interrupted by the Corruptors, who possessed the League. They threatened to kill the Titans but Raven agreed to go to the Infernal Shrine. Raven flew to the shrine and powered it. 24 hours later, Cyborg and the Titans implemented their plans and freed Superman of Corruptor control. He then freed Wonder Woman and the Flash but they were too late. The shrine generated a massive portal and Trigon emerged from it. He marched towards Kahndaq City. Raven knew the only way stop him was get the crystal from his realm.

Wonder Woman, Superman, and the Flash attacked Trigon with boulders and their strength but it did little to deter Trigon. He didn't acknowledge them and continued to Kahndaq. Not even Superman's heat vision could stop him. He lay waste to the city, projecting energy blasts from his eyes, as the League continued in vain to try and fight back. Trigon reached out to Raven and promised to strip the flesh from the bones of the Justice League then her friends. He vowed Earth and all the souls on it would soon belong to him. He implored her to give up because she was weak like her mother. Raven countered her only weakness was loving him and hoping he would love her in return. She declared she found friends she would give her life for, friends who gave her the love and strength to stop him again. Raven chose a shard of the crystal and asked Azarath for her strength to contain Trigon. Raven's soul self crossed over to Kahndaq City and enveloped Trigon. Trigon attempted to fight back but he was pulled back to his realm into the shard. Trigon was irate and vowed it would never be over. He would keep trying to escape.

Raven elected to stay in Trigon's realm and watch over the shard. It would be her home. Robin quoted Robert Frost and convinced Raven home was with the Titans on Earth. Raven wore the shard on her forehead like a chakra. In a way, they were together as he wanted. Trigon screamed for his release and vowed to get out and kill everyone she loved. Raven continued to ignore him and partied with Cyborg and the other Titans on pizza night. 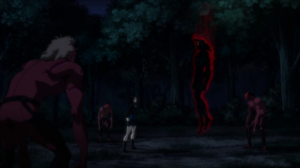 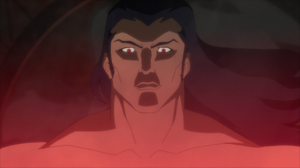 Trigon is his human form 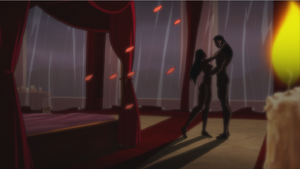 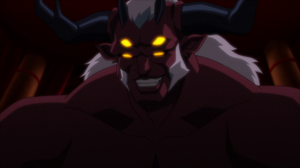 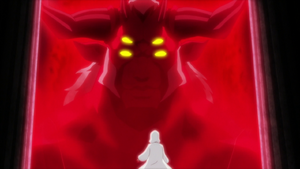 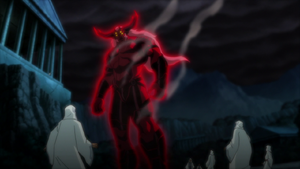 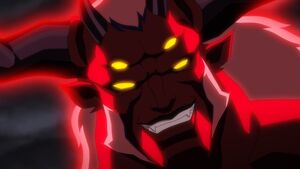 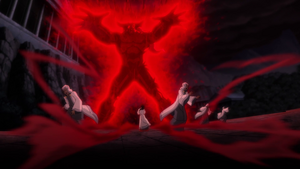 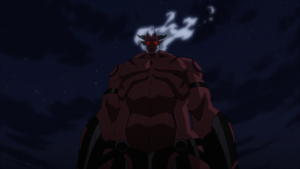 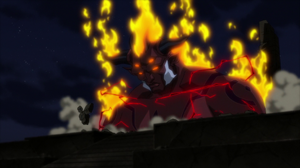 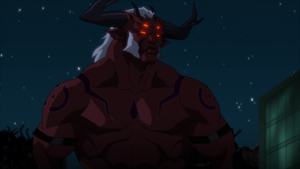 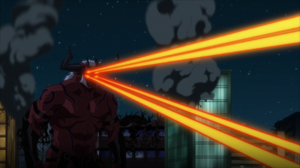 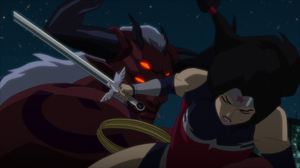 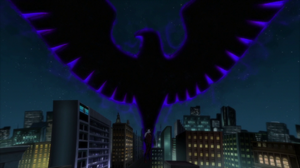 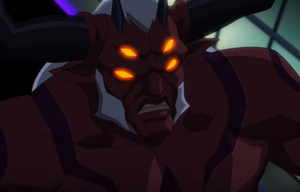 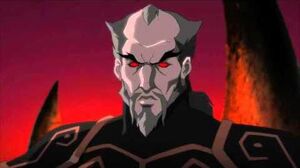 Justice League vs. Teen Titans - Robin vs. Ra's Al Ghul
Add a photo to this gallery

Retrieved from "https://villains.fandom.com/wiki/Trigon_(DC_Animated_Film_Universe)?oldid=3469008"
Community content is available under CC-BY-SA unless otherwise noted.